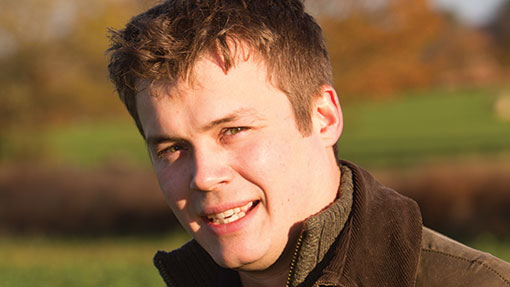 This time of year is one of the best points in the farming calendar. We’re finally busy with fieldwork and enjoying a decent period of weather.

I’m very pleased to have finished all our 250ha of spring cropping, with two-and-a-bit men (including myself), my wife doing the rolling and a pack of tractor dogs. Having finished, it is satisfying to see that it all looks well established, with the peas emerging as I write.

Given our heavy clay soils it was nice to have a split approach with cultivations; some was ploughed and pressed, the rest was cultivated with a Vaderstad Top Down. It has been a useful experiment to gauge which cultivation method gives the best emergence rate of oats.

The ploughing of last year’s linseed stubble enabled us to go earlier and produced a lovely tilth, but did require one more pass of the culti-press. Although more labour-intensive, the ploughed land has had marginally better emergence of the oats and time will tell if this leads to better yield.

My attention has turned to next year’s cropping already, with the CAP reform process forcing farmers to think ahead more than ever. Even though the final fine print seems some way off, what counts is what goes in the ground from August onwards. Politics can get in the way of common sense, although I’m rather of the opinion that this one is right in some elements.

The three-crop rule will be a headache for some producers, especially the smaller units and contract farming agreements, which I also run.

I was however fairly shocked by Strutt and Parker’s claim it’ll cost a typical 300ha arable farm £9,000/year. If there are legitimate reasons for fallowing areas, such as blackgrass, then this does have some value by increasing yield with the reduction in blackgrass. If there isn’t a legitimate reason for fallowing then why not grow another crop – ingenuity may be needed, hence why I’m starting to sketch plans for a sub-soiler bean drill, bringing cheaper establishment, rotational subsoiling and a bigger drilling window as additional benefits. Thank you CAP, I think?