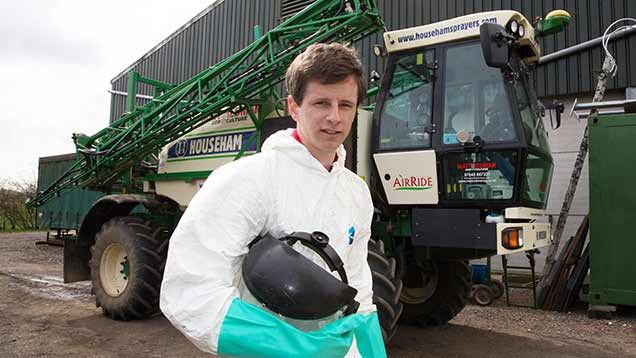 Combines are rolling across East Anglia, although luckily not here just yet. The oilseed rape was desiccated last weekend, so the countdown has begun – grain stores have been cleaned down and the combine is almost ready to go.

The recent heatwave hasn’t done the wheat any good – time will tell just how big an effect it has had, but it changed colour virtually overnight. There certainly won’t be the yields of last year, but lower disease pressure and timely fungicide applications will hopefully mean they are at least average.

Avadex (tri-allate) is continuing its popularity increase due to good results last autumn – it is clear to see which pre-emergence programmes included it here.

As a result I have made the jump to running two machines this autumn to keep up with demand and ensure optimum timings are maintained.

The next week will be spent getting the applicators ready and National Spraying Testing Scheme tested, before they are pressed into service broadcasting OSR and cover crops before the Avadex season starts.

I think there could be danger looming for cover crops and direct drilling as there seems to be lots of folk jumping on the bandwagon with limited thought and possibly the wrong expectations – buying a drill or sticking a cover crop in the ground is only the tip of the iceberg.

I am a strong believer in the idea and personally think it has great potential, but I think careful thought and planning is needed to ensure they are used for the correct reasons. Otherwise research and trials are abandoned after a few years because people have rushed into using them, failed and lost interest.

We will soon know just how serious the effect of cabbage stem flea beetle has actually been – while statistics show only a small percentage of the crop was lost nationwide, there must have been a lot more that managed to hang on. These crops were then full of larvae in the spring and subject to continued damage that has not yet been quantified.

The recent rejection of the NFU’s application for emergency use of neonicotinoids for a limited proportion (54%) of the crop area is a major setback, and has probably helped seal the fate of the crop on some farms.