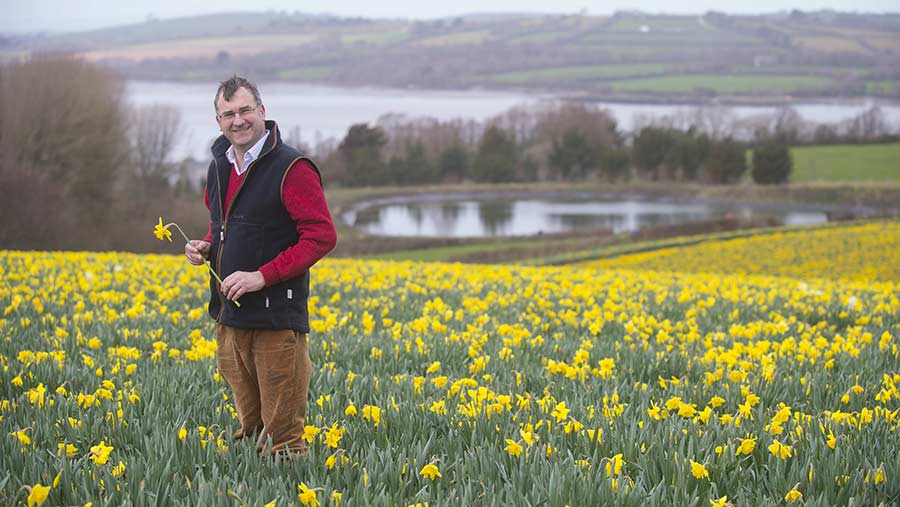 I have just returned from a trip to the John Deere sprayer factory at Horst in the Netherlands.

As always the hospitality was excellent, but the real purpose of the trip was to update myself with their latest developments in sprayer technology.

I have run a trailed sprayer for the past six years, having taken the mounted route in the past. I am often asked why I don’t have a self-propelled machine, but in truth I don’t miss what I haven’t had.

A trailed machine works well for us, even with our diverse cropping programme. The ability to accurately steer around at the headlands has improved immensely in recent times and is not an issue.

I also see the availability of another tractor at certain times of the year as a major advantage over a single-purpose machine.

When I do eventually upgrade, the addition of further technology is a must to improve the driving experience, save on spray chemical and cut out some of the paper used in the record-keeping process.

Back at home, daffodil picking remains challenging. Oversupply early in the season has depressed prices and once they are down, it is hard work getting them back up again.

A tight harvesting specification became even tighter as only the best would sell. Our pickers arrived just as the weather turned colder, slowing growth.

This lead to a degree of frustration as they took longer than planned to get up to their desired earning level.

We are progressing through the crop now at a sensible rate, but you never quite know what is around the corner.

It certainly is a crop where every season is different, even though I feel I must have seen every possible permutation by now.

Cereal crops are showing the signs of a wet winter. Even the well-established early-sown crops look fed up with wet feet.

A number of the later crops have been hit quite hard in places by salt-laden winds coming off the sea. Some redrilling and patching up looks inevitable.

I am keen to start drilling spring barley, but that looks some way off, even on light land.