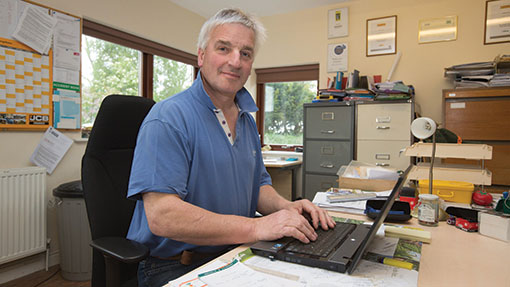 We are entering the final stages of the countdown towards Cereals 2014 and when you read my next Focus column we’ll be discussing what the highlights were and what everyone took away from the event.

It will be the second time we’ve hosted Cereals and preparations started in March 2013 for this year’s event, when we chose the fields and signed up an agreement with the organisers, Haymarket Exhibitions.

There have been a lot of changes since the last time we hosted in 2010, with new ideas being implemented from experiences gained before.

First, the actual location of the event has moved into the field next door, putting it closer to the A505. In 2010 a park-and-ride system was employed to get visitors on to the site, which drew a mixed response from its users.

This year, there will be no park and ride, so the novelty for this year will be a pedestrian bridge spanning the A505, which will be how visitors from the west will access the event. Including the machinery storage areas, car and lorry parks, working demo areas and walkways, the whole event will occupy an area of just over 84ha, which is the largest ever.

I continue to be amazed by the work and detail that goes into organising Cereals. Traffic is always a massive issue that occupies a lot of the team’s time, with endless meetings with the relevant autorities to enable workable solutions to be found with the least effect on the area.

This year there will be some 480 different stands at the event and I hope everybody will be able to get around the event and support them.

My advice is to get to the event as early as possible before the local build-up of traffic for commuters and school runs.

The car parks open at 6.30am and early birds with be rewarded with a complimentary cup of tea or coffee, with catering facilities opening up early doors as well.

I look forward to seeing you all here at Chrishall Grange for Cereals 2014.