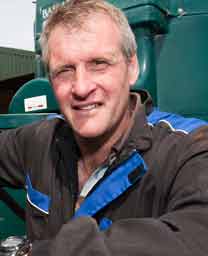 When my neighbour – a one-time contributor to these pages – was told that his last load of malting barley had been rejected because it was over the limit for admixture, he was a bit surprised, and started to protest.

The caller interrupted (before being questioned about his fatherhood) and suggested that there was no way that the rules could be bent because it was 75% oats! Somebody had left the chute from the oat bin open.

I heard this story only a day after last month’s deadline, so I couldn’t wait to get it off my chest, hence its inclusion in the first paragraph.

Tillage 2009 took place on a farm very close to me, so I didn’t miss the opportunity to inspect some excellent equipment in its working environment. But I came away somewhat disheartened, as all the machinery on display is becoming unaffordable for an average-size farm.

We are caught in the vicious circle of having to make machines work harder over more acres simply because they are a lot more expensive than those they replace. This has the knock-on effect of driving up rents as people battle over any vacant land, because we all know that the output from all combinable crops, despite a false dawn, has not risen in real terms for many years. I’m sure, however, that a lot of us purchase some of the big equipment because of the questionable ego trip we get from owning such beasts.

More from other farmer focus writers