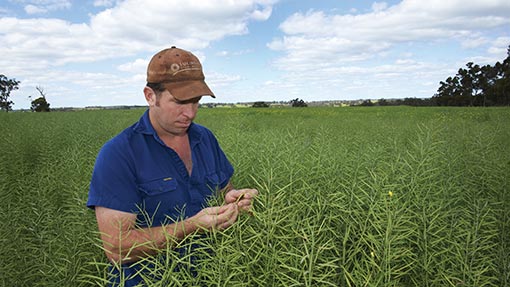 Farming can be a cruel game at times and this week was one of those when it’s hit hard. It’s storm season here at the moment, when at the start of the day what looks like fine sunny weather turns into a small flood or worse still, hail.

We lost 700ha of standing canola in 10 minuets when hail the size of golf balls smashed the crop to the ground. It hailed with such force that it cut the canola stalks, 10mm thick, in half and smashed the pods to the ground. The crop wasn’t the only thing affected. Neighbouring vineyards were shredded and looked like they had just been pruned and the trees have been stripped of their leaves and bark, leaving the bush looking like a forest of skeletons.

In all 50,000ha of crop was wiped out across the state over a three-day period. This amounts to about 100,000t of grain with a value AUS$40m. It will take over one month before we know the exact damage as it will take some time for the hail assessors to cover that much country.

We are well insured, so hopefully it won’t be a financial burden for us. What I am surprised at is just how gutted it’s made me, and the people who work for me feel. I’m feeling a real sense of loss over the smashed crops. There’s a lot work and passion that goes into growing a crop and to not get to harvest makes me feel cheated. I’m going to end up with the insured crop value and not the real one, the one I’ve worked so hard to get all year.

If you were to ask me why I farm, I will tell you that it’s for the money to support my family and to grow its wealth over time. I’ve realised this week it’s more than that. It’s the challenge of growing crops in the face of all that Mother Nature throws at us. On some of our crop I lost this year but I’ve already started planning for next year.

Rob Warburton farms 3,000ha with his wife Jen and two daughters in Kojonup, below Perth, in Western Australia. Cropping includes wheat, barley and oilseed rape. Wildflower seed is grown for retail. Merino sheep are reared for wool and meat.