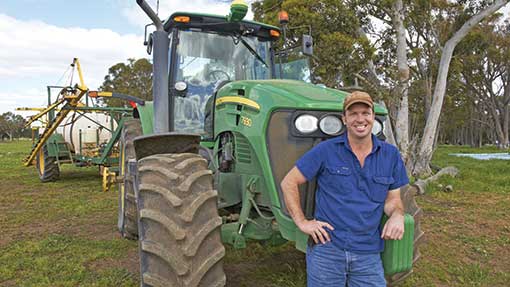 In Western Australia, rain on Anzac Day (25 April), is said to be the perfect start to the season and for most of the state, it was. Drenching rain has fallen in most agricultural areas, with canola and lupin programmes finishing up and the switch to cereals starting soon.

As for me, I’ve been stuck in the workshop with a multimeter in my hand. Mechanically, both the seeder and boom sprayer have been ready for the past month, but it’s the electrical stuff that’s holding us up.

Two weeks ago I had a new spray rate controller fitted and since then the spray boom hasn’t been working properly. Two mechanics and two days later, we had stripped down the controllers, rebuilt the system and it still wouldn’t work. As I was filling the boom with water to try it again, mechanic two was playing with the settings on the screen and found the wrong checkbox had been ticked. The boom now works great.

If you were to look into the cab of our seeding tractor, you would understand why driverless tractors are going to be so popular in the future; it’s because there’s no room for the driver. The cab has guidance screens, air cart controllers, liquid cart controllers, blockage monitors, video screens for the external cameras, phone, two-way radio and the autotrack steering wheel. All of these have cable two inches thick running out of the tractor cab and along the bar to the air cart 20m to the rear. What could possibly go wrong with that!

My head is spinning with magnetic sensors and pressure control switches. And how the hell do those multimeter things work anyway?

The upside is that we are going to finish our early barley tonight, start on canola tomorrow and I haven’t used my multimeter for at least two days. As I write this article, the rain is falling on our tin roof and there’s simply no better sound to go to sleep to.

Rob Warburton farms 3,000ha with his wife Jen and two daughters in Kojonup, below Perth in western Australia. Cropping includes wheat, barley and oilseed rape. Wildflower seed is grown for retail. Merino sheep are reared for wool and meat.