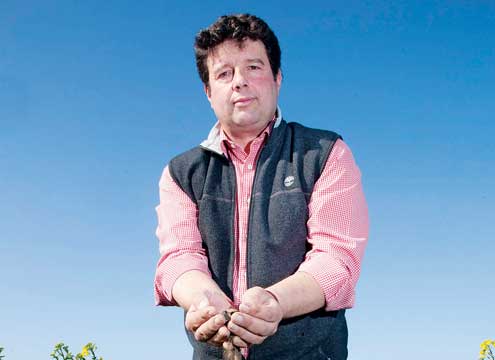 Oilseed rape desiccation has finally started, three weeks later than in a normal year. Only a small proportion of the crop grown on gravel land is fit to spray off, with the remainder at least another week away. Winter wheat on similar land is also turning very quickly. This crop was of course established in poor conditions and the roots cannot get down to access moisture, of which there is still plenty lower down in the soil profile.

The spring crops, on the other hand, which were established in comparatively good conditions, are looking in reasonable shape, with no signs of any drought stress. The roots have gone down and are sucking moisture out of the ground. Where land has remained fallow with no cover crop the surface has baked out and the subsoil still resembles wet plasticine. The soils this harvest are going to need very careful management to start the process of restructuring again.

Clearly the spring crops are going to be harvested late, with a rapid turnaround required to establish winter oilseed rape and wheat. To this end we are reducing the rape area this year, so we aren’t pushed into late establishment of the crop, and replacing it with hybrid winter barley.

It is 10 years since winter barley has been grown on this farm and we are hoping its return will bring many benefits to our farming operation, primarily as an early starter to harvest that allows mole draining and lime spreading to be done before an early entry into oilseed rape. Barley also gives us our third crop in the rotation, as required under the new CAP deal.

All our unused wheat seed from last autumn has now been sampled and sent off for germination and vigour testing. I hope it proves viable, as there is quite a quantity of it and the thought of replacing it fills me with horror. It will be better to find out now and do something about it, rather than planting a load of rubbish and wondering why it hasn’t come up. Happy harvest.