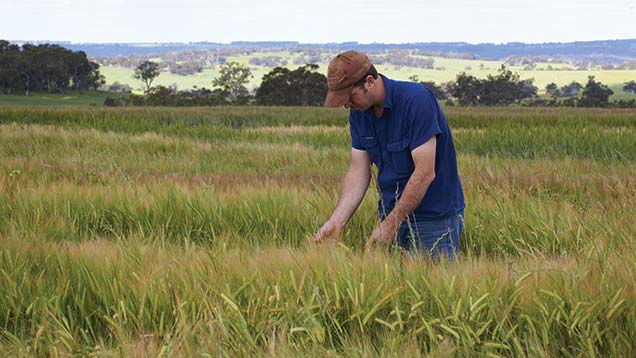 I discovered my first glyphosate resistant ryegrass plant this week and I think I’m in the second stage of denial.

The first stage happened last year in a crop of barley when I found a tillering ryegrass plant when the crop was only at the leaf four stage. I thought “spray must have missed it… twice.”

It’s when I planted GM Roundup Ready canola into the paddock that the realisation hit me in the face. Two sprays of 900g active Roundup and I found a tillering ryegrass plant.

I rang my agronomist, thinking he might confirm my thoughts that it was just a missed plant and that resistance hasn’t occurred yet. He shattered that idea.

Last harvest scientists working on resistance management in Western Australia took ryegrass samples from trucks delivering wheat. They germinated and grew them out to leaf stage three and then sprayed them with Roundup and 80% of the pots showed resistance.

Many people are blaming Roundup Ready canola for causing the resistance but we have known about glyphosate resistance for the past 20 years.

If anything, canola has highlighted the problem not caused it. With glyphosate only being used as a knockdown and nearly all other in crop grass selective herbicides already showing resistance, it wasn’t until we started spraying glyphosate in crop that the problem showed up and we noticed it.

I think we have been in denial for some time now and it is time to wake up and start taking action.

Integrated weed management has been a big part of our programme for the past four years. Using two different knockdowns five days apart pre-drilling, pre and post-emergence residual herbicides and mechanical weed seed capture at harvest have been having a big effect on the amount of weeds and dramatically slowed the onset of resistance and limited its effect.

We need to embrace the latest technologies and all they offer to agriculture and society but also recognise that regardless of how clever we think we are, nature will always find a way to beat us.