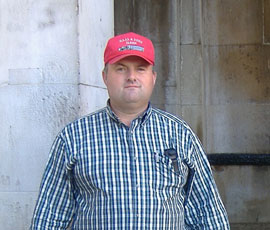 Autumn harvest has started in eastern Kansas, with surprisingly good yields. Crops are somewhat later than normal, both because of later planting and from “shutting down” during hot dry weather.

I have only been able to harvest one complete field of soya beans; it made 3t/ha – the best for that field in the 27 years I have farmed it. In several other fields, I have been cutting around the green spots and yields there seem equally impressive.

If all the ground yields similarly, I will be very happy, especially with a price over $440/t (£273/t). Maize yields are not as good, but not as bad as had been feared, running perhaps two-thirds of average, much better than last year.

Rain (18in) in the middle of the summer kick-started hay crops and I have more hay than I have had in years. There has been very good growth of pastures late in the season. Last year I started supplementing cattle in July; this year I put out my first lick tubs on 16 September.

October tends to be the month most wheat is planted in my area. In eastern Kansas, 100kg/ha is a pretty common seed rate. Two popular varieties are Everest from KSU and Cedar from Westbred.

Our federal government continues to be drama driven. We are in the midst of a “shutdown” that really only impacts a few areas, the Farm Service Agency being one of them. Our direct farm payment was already cut because of another dramatic event, the “sequester” (the automatic spending cuts triggers by Congress failing to agree the budget. Now what is left is being held up because of the shutdown.

It seems the thinking in DC has changed over the last few decades from trying to do the best thing for the nation to trying to beat the opposing political party at all costs. I think most of us peasants worry about the future and if we will end up somewhere between what we used to be and a third world banana republic.

Brian Hind farms 1,250ha of prairie land in Greenwood county, Kansas, America, of which 770ha is family owned plus the rest is rented. Of this, 330ha is arable cropping with maize, soya, grain sorghum, alfalfa plus a mix of rye, triticale and turnips for grazing by 200 beef cattle. Grassland is used to produce hay