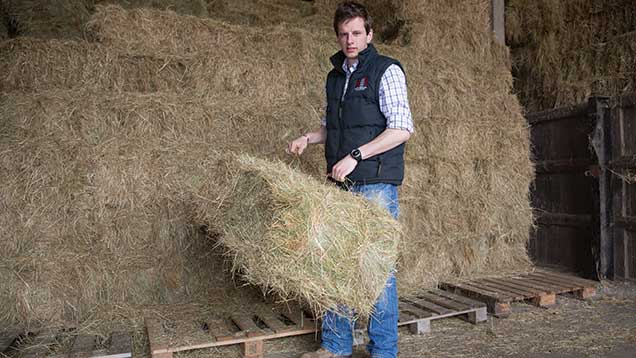 Harvest is in full swing and oilseed rape yield has been better than expected although they are based on guesstimations of trailer weights so, depending how optimistic the trailer drivers were, could still go either way.

Next year’s crop area will be similar to this year and has already been planted, although Charger has being swapped for the candidate variety Elgar. Hopefully, with less being grown we’ll see a price increase, but I won’t hold my breath.

About 70% of wheat has been cut at the time of writing. Both grain and straw yields have been good considering how early some areas died off.

Currently all of the wheat is Target, apart from around 17ha of Scout grown for seed. Next year second wheats will change to Skyfall and some spring Mulika to try and add some value with milling premiums and give some cover crops a trial.

Winter beans look good, but have not yet been combined. They will also remain as a break crop next year, although they are also facing uncertainty in the market. Time to think of a magic, wonder break crop.

With all manner of machinery out and about working hard at the moment, we rely on the support from dealers a lot during harvest and regardless of the colour of the machine, they all break down sometimes.

Without being able to pick up parts on a Sunday morning or the service guy coming out to that late-night breakdown, harvest would be a much more stressful affair.

I’d like to take the opportunity to thank the guys at P Tuckwell for the excellent service and support I’ve received since I started my little business. Whether it’s a breakdown, parts or just advice, I know I can pick the phone up and get what I need or that they’ll go that extra mile to ensure it’s sorted as quickly as possible.

In other news, I’m pleased to be able to say I’m an actual farmer now, having taken on the tenancy for a massive 8.3ha back in March.

It may not be much, but it’s the start of farming on my own and hopefully I can expand on it over the coming years alongside the contracting.