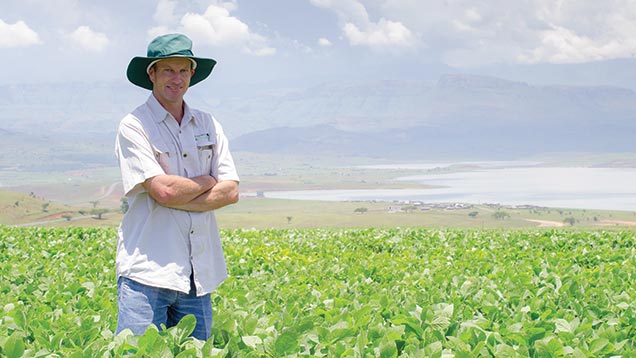 As South Africa is situated in the southern hemisphere we are now in the middle of winter. I farm in the summer rainfall area of South Africa and get little to no rain in winter. We are at a reasonably high altitude,1,200m, and are frosting most nights, although days are nice and warm as the sun shines every day.

The plants that haven’t frosted have died of drought and the residues of the summer crop (maize and soya beans) lie tinder-dry on the fields. The natural grasslands have also “died” although, being perennial, they will regrow from the roots as soon as the spring rains come.

As you can imagine, this is perfect for fire. Add wind and you have a disaster. August is known as the windy month, but in reality the wind starts in June and blows well into October, sometimes for three to five days without rest.

In preparation for this fire season, we are getting all our firebreaks in place. A firebreak is a strip that we burn in a controlled circumstance on a calm day. These strips are strategically placed ,often in collaboration with our neighbours, and any break less than 40m wide isn’t worth much, as I know of instances where fires have jumped breaks more than 200m wide.

In the years before we no-tilled our fields we would work all the residues into the soil post harvest, which helped control fires. Now that we no-till all our fields we have less fire barriers and more to lose. Surface residue is the backbone of no-till as it improves water infiltration and retention and prevents soil erosion.

This residue is built up over many years and is not only a store of organic matter, but also soil fertility. A hot fire will remove years of organic matter and compost, leaving the soil surface beneath exposed to strong winds, blowing the topsoil away.

I know that there are many farmers in the UK that would love to be able to burn their fields again and here in South Africa, there are no restrictions against such a practice. But I would do almost anything to prevent it.

Bruce farms in KwaZulu Natal, South Africa. He plants 320ha rain-fed summer crops. He also runs 2,200 weaner oxen on pastures, finishing them in a feedlot with maize grown on the farm.