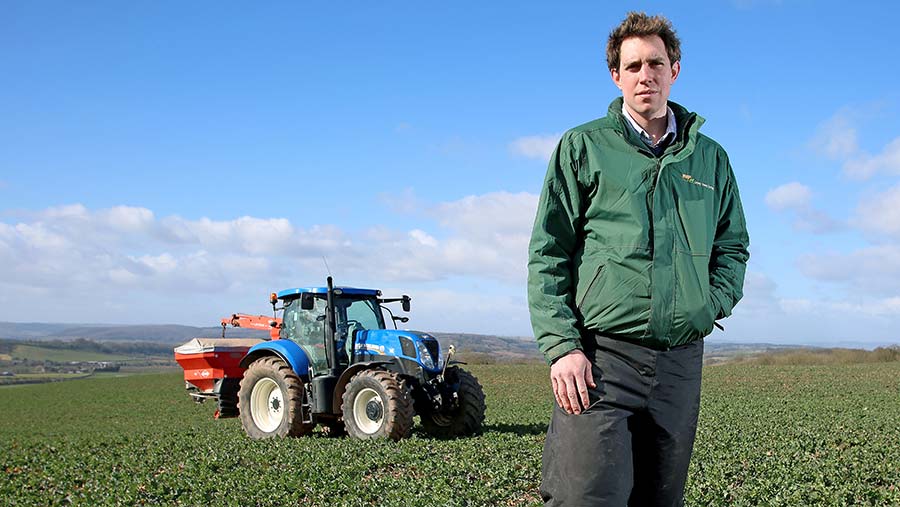 It’s extraordinary, but 2018 has been our wettest year, in recorded rainfall, since 2014. However since the New Year, ground conditions have really improved.

So much so that as I write on 15 January (end of the closed period for manufactured nitrogen fertiliser), we are spreading 100 kg/ha of ammonium nitrate on to our winter barley.

Normally with our ground we have to shut the gate at the beginning of November and not return until the third week in March. To be travelling in mid-January and hardly leaving a mark is quite extraordinary.

The decision to do this has been based on past years’ evidence and the correlation between the delayed first application of nitrogen and poor yields of our winter barley.

For example, last year I am convinced we lost tillers due to not getting any nitrogen on until April.

I felt the opportunity was too good to miss as the weather has a way of evening itself out. It will also take a bit of pressure off labour resources as the early application of nitrogen also clashes with lambing.

All the other winter crops look well (wheat, oilseed rape and beans). The annual pigeon battle has just started on the OSR, and with such a mild autumn and winter so far, good numbers of both wild and tame oats are showing in some of the wheat.

Lambing will be our next focus, with 850 ewes due to lamb between 27 January 27 and 5 March. Our 65ha of rye and vetch has grown really well and will provide excellent clean grazing to turn ewes and lambs out on to.

This year to try and speed up electric fencing we have purchased a RAPPA winder that will go on the bike.

I am also hoping it will allow us to manage the grazing better, and even back fence if we have to, to ensure we leave the soil in the best condition possible to drill into.