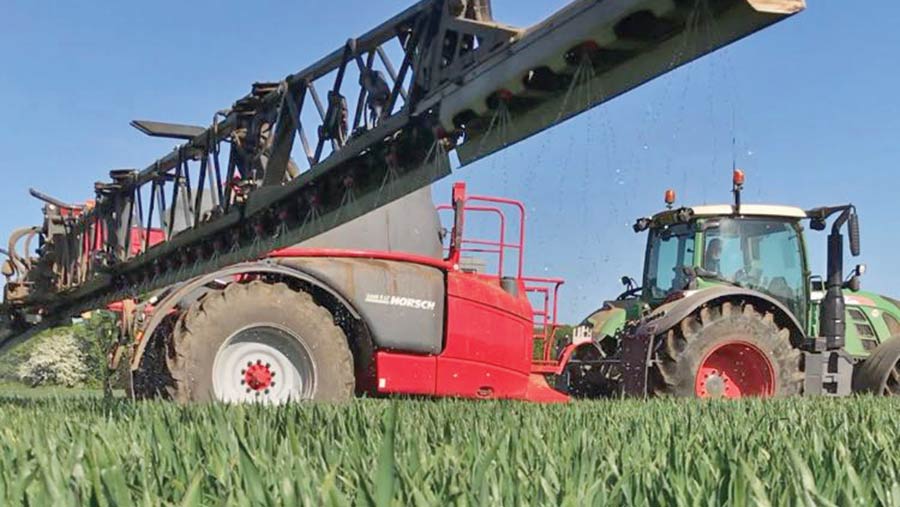 One large Norfolk arable farm is seeing the benefits of a switch to using liquid nitrogen in terms of accuracy and flexibility, although it is too early to link the change to a rise in yields.

Problems with using solid fertiliser on windy days and the precision achieved using liquid were factors behind the move in 2014, which has resulted in more even crops.

Based just outside North Elmham, north-west of Norwich, Foxburrow Farm gradually introduced liquid fertiliser over its 1,800ha of land, and applies it using two Horsch sprayers.

So what were the key factors involved in the switch on the farm, which grows oilseed rape, winter wheat and sugar beet on a range of soils varying from clay loams to sands over chalk?

Farm director Will Goff explains that there were a number of key reasons behind the change from granular to liquid fertiliser as he was keen to utilise the technology available through modern sprayers.

“A normal fertiliser spreader is never going to vary the rate, provide section control, or apply the functions that liquid can do, through a sprayer,” he says.

“You’ve got individual nozzle control, flow rate control, everything under the sun is there, and we felt that if we wanted that level of detail, we needed to convert to liquid,” he adds. 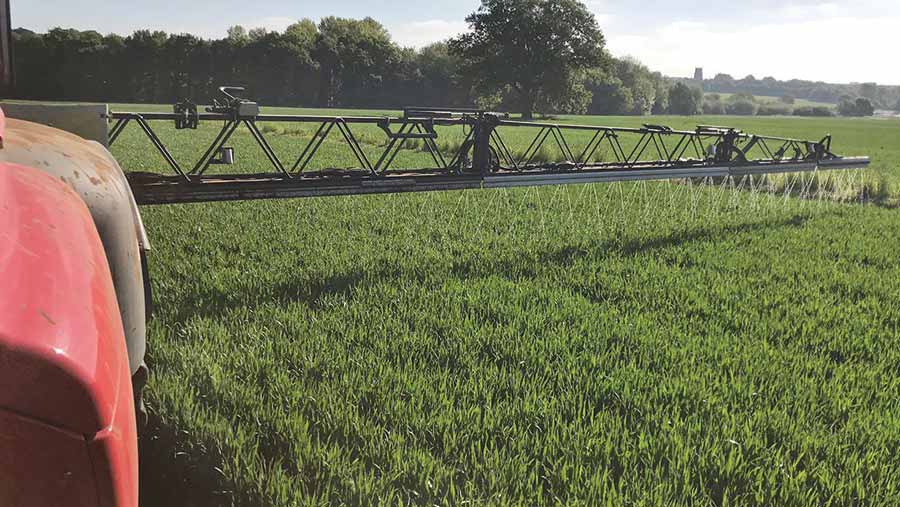 Windy days are less of a problem with liquid application

John Alston, Foxburrow’s farm manager, says that on windy days they had to pick and choose when they could spread solid fertiliser, which was reducing productivity.

He also explains that there were a number of aspects of solids that didn’t agree with their farm strategy, such as the use of vital machinery.

“For me, the forklift is the most valuable piece of kit for farmers throughout the whole year. Having that tied up transporting bags of fertiliser to fields isn’t practical,” he says.

Mr Alston highlights other frustrations with solid nitrogen including the wait for rain to break down and soak in granules, the amount of shed storage taken up by bagged fertiliser, and the need to dispose of bags after use.

Mr Goff says five years’ worth of data would be needed to say conclusively that yields have improved as a result of the switch to liquid. However, one visible difference since the change is that crops look far more even across the field.

From left: Andrew Melton, John Alston and Will Goff

“With solid fertiliser, there’s usually a big difference in appearance between hills and hollows, and you can see the headlands tail off. With a liquid system, you’ve got uniform green right to the edge,” he says.

Mr Goff notes that it is hard to say whether or not this is thanks to liquid, as they have brought in other changes such as variable rate seeding, but his gut feeling is that they are seeing better crops.

Some yield improvements have been seen in oilseed rape crops, as liquid nitrogen can be applied later than solid fertiliser due to the superior height of sprayers.

One key drawback of liquid fertiliser can be the risk of scorch, which occurs when applied in hot, dry weather. Scorch from liquid nitrogen can cause spotting and tipping, both of which reduce green leaf area with the potential to affect yields.

Mr Alston, who does all the spraying, highlights that the timing of liquid nitrogen on wheat at the flag leaf stage is critical to avoiding scorch.

“I monitor the weather constantly, working early mornings and late nights, when there’s a little bit of dew on the ground, providing ideal conditions,” he says.

Another possible disadvantage of liquid is the corrosion it can cause to sprayers, leading to increasing wear on parts such as booms, pumps and electrical connections.

Mr Alston says growers need to do preparation work on their sprayer, to minimise the chances of corrosive damage, adding that the relevant parts of Foxburrow’s two sprayers are mostly stainless steel.

Mr Goff adds that if sprayers are given a quick blast with a pressure washer after use, there is a good chance of winning the battle against corrosion.

“If sprayers are not looked after, then liquid has the ability to chew through anything,” he says.

The switch to liquid nitrogen on the farm does not create a reduction in labour, as a second operator is still required for the large 16,000-litre stainless steel bowser, which provides fertiliser and sprayer support.

“While it hasn’t necessarily reduced manpower and the need for a tractor, it keeps the forklift on the farm, which was a priority,” says Mr Alston.

Top tips for switching to liquid

Safety is extremely important and Mr Goff highlights that with solid products, there is always a risk of accidents such as bags slipping off forklift pallet forks and half-tonne bags dangling in the air.

Mr Alston says a major failure of a liquid tank would only happen if somebody drove into it, and explains that they have a concrete barrier in place to mitigate that risk.

The positioning of liquid tanks is key, and he suggests that they are sited as close as possible to the farmyard and away from busy roads, to reduce the risk of tampering or vandalism.

Cost of switching to liquid

Mr Goff believes liquid tends to be slightly cheaper than the granular alternative, explaining that storage tanks are rented from the fertiliser supplier, Frontier.

“Liquid, without a shadow of a doubt, helps us make savings in the amount of fertiliser we use. You don’t have the overlaps, especially with sprayer functions such as GPS and auto shut-offs,” he says.

“If you’re wanting the accuracy and efficiency of liquid application, then it’s likely you’re going to invest in a high-end sprayer, which we’ve done,” he adds.

Andrew Melton, agronomist at Frontier, says many of its customers enjoy the flexibility of using liquid fertiliser.

“With granular, you’re buying it in bulk at the start of the season and filling a shed. However, with liquid, you’re only bringing more in, if and when you need it,” he says.