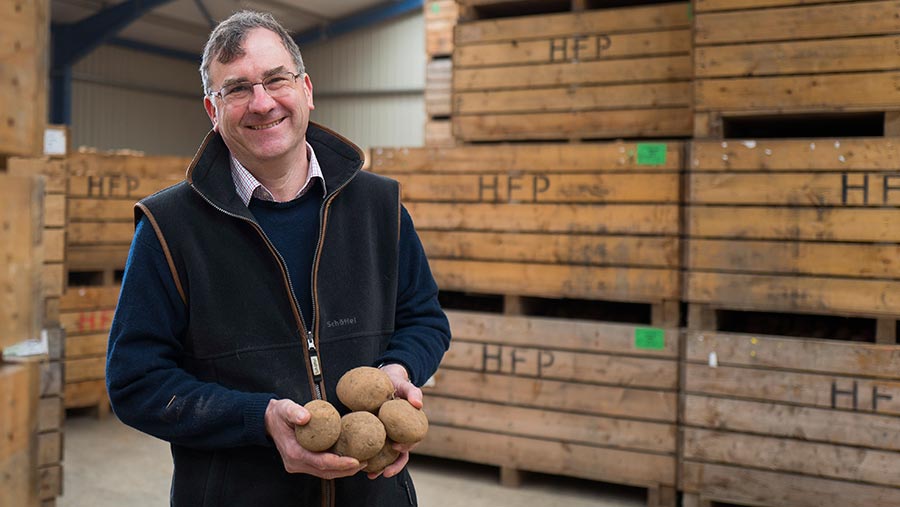 Potato planting continues apace. Cold unyielding seed-beds have made initial progress slow with us being at least a week behind compared to the same time in the previous two years.

Conditions are improving all the time, but I don’t think that we will catch up, meaning that completion will be later than usual.

It is too early to tell what effect that will have on final yields, but I think our situation is typical of many and supplies could well be tighter.

Emergence is also proving to be pretty steady, which in some ways has been a blessing with a number of late frosts proving their potency on the volunteer potatoes appearing in last year’s fields.

We are soon going to need some warmth to encourage growth as lifting is due to start in eight weeks.

Stocks in store are about in balance with demand at present, however, I would prefer not to have to venture into what looks like an increasing spot price market if early yields are low, such that lifting needs to be delayed.

Land work on other fronts has been taking place for a number of weeks now with spring barley, beans and peas drilled.

The onion sets have also been planted. I am trying a more novel crop this spring with 12ha of canary seed being drilled on a buy back contract.

On the face of it, it looks a reasonable proposition although that is not too hard when compared to the forecast margins on the other combinable spring crops.

Finally, I am writing this feeling rather jaded having just returned from a reunion at my old college Seale Hayne.

The college met its demise as an agricultural establishment in regrettable circumstances a number of years ago; however, its spirit lives on in tremendous form.

Social media was actively discouraged over the weekend, somewhat wisely, to prevent embarrassment. We were incredibly lucky to be able to use the original facilities and have the opportunity to catch up with old friends now in a wide range of careers.

Thanks to the organisers, who know who they are, for an unforgettable time.