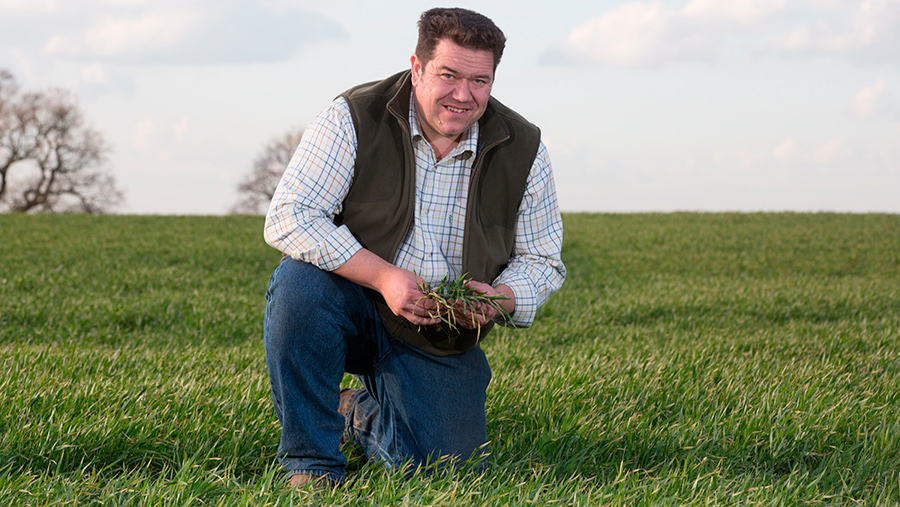 Spring is finally here and just as we want to get on the land we get 57mm of rain – not what we wanted.

Some low-lying areas have small amounts of standing water, which should soon drain, but it does mean we won’t get an early start.

Oilseed rape is just going into stem extension and looks well, except for a few anaerobic patches where it’s gone purple.

What was going to be a four-pass nitrogen plan will now be three, with the first starting any day, hopefully.

Spring seed-beds feel a little sad and cold. Where we rolled them in the autumn we’ve had better blackgrass germination than where we didn’t. However, the rolled fields will take a little longer to dry out ready for drilling.

Spring cropping heavy clay is still a steep learning curve for me.

Last month we hosted a controlled traffic farming day along with our neighbour Paul Sheardown. Paul very kindly demonstrated his 6m system and we demonstrated our 12m system.

The day consisted of looking at the relevant machinery and inspecting soil pits, looking for evidence that our hard work and efforts were paying off, and I’m happy to say they are.

We could see small amounts of compaction in the traffic lanes and none at all in the traffic-free zones. This evidence was then further supported by Tim Chamen from CTF Europe with a practical demonstration.

On both farms the traffic-free zone drainpipes emptied first, showing far better drainage and porosity. I know this is what you’d expect to see, but you can’t beat a visual experiment to support a theory.