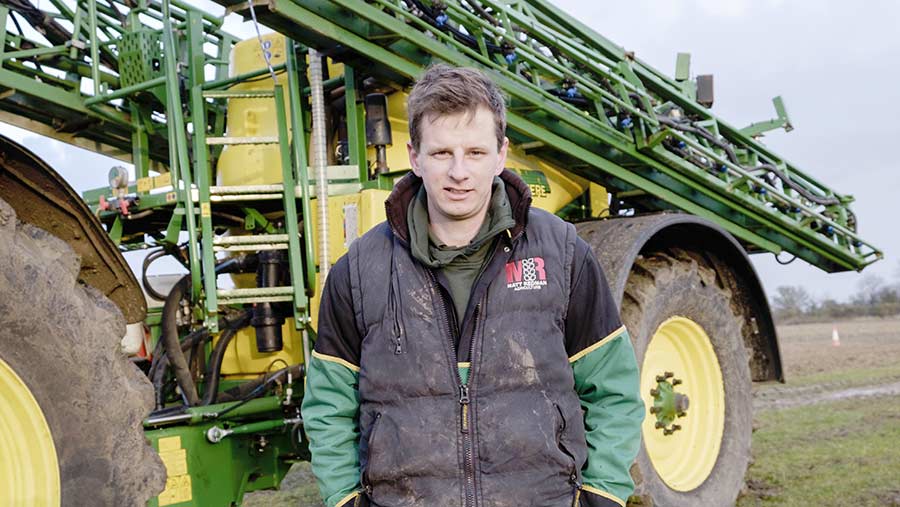 I’m reluctant to talk about the weather here as it always drastically changes between the point of writing and the day you read it.

However, maybe that wouldn’t be such a bad thing at the moment. Spring crops have all been established in very good conditions, and fertiliser and fungicide applications are all up to date on winter wheat so all crops could do with decent rain now.

Unfortunately the option to be brave and not apply a T0 to some of the winter wheat wasn’t possible in the end, as even the later drilled Skyfall had some yellow rust.

See also: Why OSR flowering sprays should be based on disease risk

I think I would have given in and applied something last minute given the dry weather anyway, in case April turns out to be a wet and windy month and T1s aren’t able to be applied in such good conditions.

It was only three and half months late, but I finally received notification that my mid-tier Countryside Stewardship application had been accepted in mid-March.

After a lot of thinking I have decided to accept it on the basis that it will provide an income from areas of the farm that would otherwise have to be voluntarily left uncropped – buffer strips near water courses for example – or would cause lots of hassle to try and farm, such as tight corners and between poles.

While payments may be delayed, at least there is a payment for these difficult-to-farm areas, while at the same time providing an opportunity to enhance the wildlife habitats on the farm.

I’m certainly glad that I don’t have oilseed rape this year, as it seems to be one negative after another for the crop at the moment.

If it isn’t cabbage stem flea beetle, it’s pigeons or late frosts while it is flowering. I think it has had its day as the main break crop in this area for a few years, although there are no clear replacements that can be grown on the same scale.

Perhaps that isn’t a bad thing as it’s partly due to the scale on which OSR has been grown that have contributed to its downfall.

I’m currently contemplating winter linseed, spring oats and more beans, while keeping an interested eye open for other possibilities to try on a smaller scale.