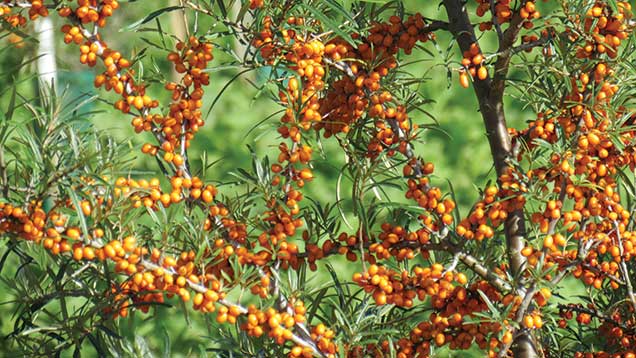 The search for a high-value, non-food crop with growth potential prompted former dairy farmer David Eagle to find out more about sea buckthorn.

Mr Eagle, who has been researching the specialist crop – used as a feed supplement for horses – since 2008, began by growing German and Finnish varieties in 2009, adding Russian and Latvian plants in 2011.

From there, he set up the British Sea Buckthorn Company in 2012, based on his farm at Kirby le Soken, just north-east of Clacton-on-Sea.

His first commercial equine supplement is now being sold. But his next target, the consumer health market, will need more growers to produce the crop.

What is sea buckthorn?

“A co-operative approach would be ideal, but there’s a long way to go. There is harvesting and processing equipment available, so growers could share costs and logistics,” he says.

Although it grows wild in the UK, Mr Eagle’s initial berry crop will come from imported Siberian sea buckthorn plants, following a deal with the Lisavenko Research Institute of Horticulture in Siberia, which has been developing varieties since 1993.

The deal was negotiated and supported by the InCrops Enterprise Hub, based at the University of East Anglia.

As a result, Devereux Farm – which is at long-term threat from the rise in sea level due to its low-lying position adjacent to the Walton Backwaters – has become a trial site for commercial varieties of the crop.

Some 5,000 plants from Germany, Latvia, Finland and Siberia, planted across 3ha, are being evaluated for their suitability to UK conditions. Currently, 10 hybrid varieties are being trialled.

“It is early days. Sea buckthorn has a centuries old reputation for its health benefits, so it is not surprising that there is a growing market for it in Europe. Demand is starting to outstrip supply,” he says.

Currently, there are about 280 growers in Europe who are producing for the food/drink and cosmetics industries.

Both the berries and the leaves contain a mix of nutrients and vitamins in a high oil content, so it is used in supplements, drinks, jams, jellies and other foods, as well as cosmetics.

The raw juice is known as the Siberian pineapple and has a citrus flavour. The natural sourness comes from its high levels of vitamins.

Sweeter varieties are being developed with accompanying characteristics such as bigger berries and higher yields.

“Many are thornless too, which makes a considerable difference at harvest time.”

A sea buckthorn “orchard” or planting remains in the ground for more than 20 years, starting to produce berries from the third year onwards, with peak production occurring in year six.

A 25ha enterprise in Germany was yielding 300t by its fourth year, reports Mr Eagle, making it a good option for a large farm prepared to invest.

“On a smaller farm, a 2-3ha enterprise works well. It is certainly something for a farm already growing berries to consider.”

Harvesting can be either mechanical or by hand as the branches can be cut and transferred to a freezer store. Once frozen, the berries can be shaken off the branches.

A specialist harvester has been developed in Germany, which cuts the whole plant down to 80cm.

“Harvesting starts in the first week of July and can continue through until October,” he says.

“There’s huge investment going into sea buckthorn in other parts of the world, such as China. In Canada, there is 50,000ha in the ground.”

Mr Eagle is keen to promote research into the crop and recently sponsored a Medical Research Council meta-analysis looking at its benefits in relation to cardiovascular diseases.