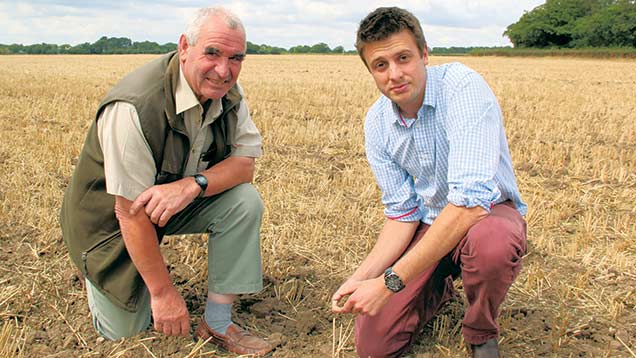 The HOLL oilseed rape area is set to triple next year, fuelled by premiums and higher yielding varieties. Crops looks at what is involved in growing a successful crop.

A specialist oilseed crop has earned its place in Meyrick Estate’s rotation, offering healthier margins than standard rape on his Hampshire farm.

Last year, it earned a £30/t premium on contract to ADM through Glencore Grain. Together with the standard oil bonus having an oil content of 44-46%, this added around £140/ha to the bottom line.

“Back in 2006 we were looking for an alternative to winter barley in our mainly wheat and maize rotation and the ground had never grown rape before.” So he took the opportunity of a contract when suggested by his Agrii agronomist.

“Yield limitations across our mainly Grade 3 and 4 land mean we’ve always looked to grow crops that will deliver premiums wherever we can.”

And in the eight years of growing Holl oilseed reap, he has always met the specification. He originally grew Spendor, averaging 3-3.5t/ha, but now grows a hybrid which pushed yields higher, averaging 4t/ha.

“We have to be on our toes controlling charlock, runch and hedge mustard, which are a particular problem on the farm to avoid compromising the oil specification,” says Agrii agronomist Todd Jex.

“But this would be priority with any rape crop here – a legacy of the scale of past kale-growing,” he explains. Volunteers are less of a problem as the land has not previously grown oilseed rape and he only grows Holl.

Getting the crop away quickly is vital in combatting the large number of pigeons generally supported by all the local woodland,” says Mr Jex.

However, Mr Bailey adds: “Being on the south coast, we don’t like to drill before the first week in September or we’ll have the crop up round our knees before Christmas.”

All the East Close Farm rape goes in after wheat at 50 seeds/sq through a Moore Unidrill following subsoiling with a Shakaerator and a quick dose of Roundup (glyphosate) to hit any chitting weeds.

The estate’s commitment to ploughing ahead of wheat and focus on early weed control in maize is keeping grassweeds well in check. This is supplemented with propyzamide wherever necessary. The challenge from runch and charlock, in particular, makes bifenox essential in most cases to support the autumn herbicide programme.

Where phoma isn’t a major issue (like last autumn), they prefer metconazole in the autumn for its extra value in promoting root development. This is on top of early rooting assistance from Take-off seed treatment and Nutri-phite PGA with the early post-emergence spray. Otherwise they opt for a mixture of prothioconazole and tebuconazole.

The good level of disease resistance in V295OL means a single autumn application generally carries the crop through to late March, when a combination of boscalid and metconazole at late green to early yellow bud provides good early sclerotinia control and additional growth regulation. This is followed up with a further dose of boscalid two weeks later.

In conclusion, the success of the crop prompted Mr Bailey to increase his area. “We’re growing all V295OL again for 2015, pushing the area back up to the 70ha it was before our rotation was disrupted by the 2012-13 winter.”