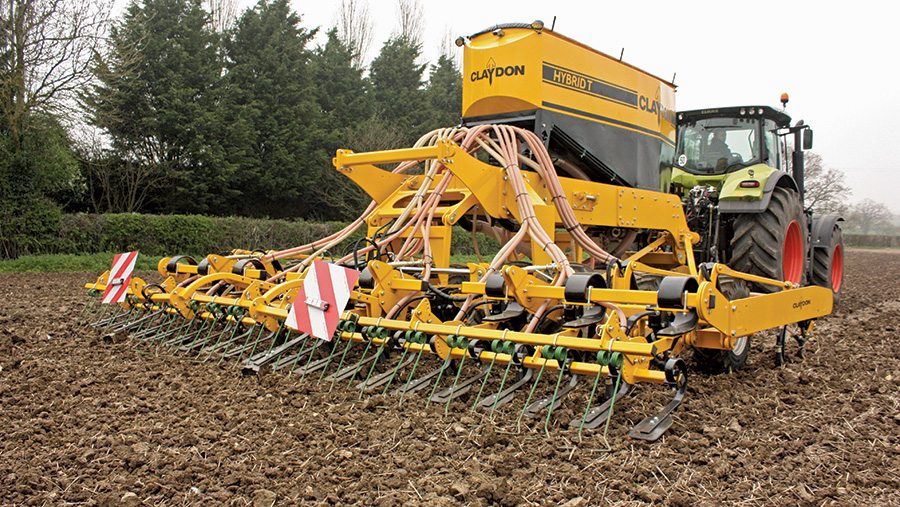 Supplied pic please DO NOT REUSE

Applying a dose of fertiliser at drilling is a common practice north of the border, but down south it’s still a relatively novel approach.

One Lincolnshire grower with six years’ experience with a liquid fert kit on his drill explains his technique.

Eleven years ago Tom Ireland made the bold step away from a conventional plough-based crop establishment system to a direct-drilling approach centred on a Claydon V-drill.

The technique worked relatively well and the switch was painless, but the machine itself struggled to deal with too much surface straw.

So in 2009, when Jeff Claydon approached Mr Ireland with a prototype hybrid drill, he was more than happy to give it a go.

It worked, and the hybrid never left the farm.

“With our old cultivation system, we would spend weeks rattling about with the plough, presses, discs and rolls trying to get a seed-bed ahead of the combi-drill,” he explains.

“But that had to stop – we couldn’t afford it anymore and we had to do something pretty drastic to get on top of our costs.

“We took a punt and went down the Claydon route, which served us well but wasn’t bullet-proof in all conditions.

“Four years later when the hybrid arrived we could immediately see the benefits of the staggered tine arrangement and its ability to handle trash – it worked a treat.

“However, the drill lacked one key feature at that time – the ability to apply fertiliser.

“With 300mm row spacings on the Claydon, I could see how band spreading would make sense for us. But of course fitting a granular applicator to an existing drill is no simple task.

“The obvious route for us was to go with liquid. In 2010 we decided to take the plunge and bought an Opico NitroJet kit to go on the drill.”

A 1,000-litre front-mounted tank sits on the weight frame of the Challenger MT765 that pulls the Claydon. Its hydraulically-driven 400-litre/min self-priming pump sends liquid back through pipework to a manifold on the drill.

Since that first season the business has applied a 14:14:0 mix at a rate of 87 litres/ha when drilling oilseed rape.

“Because we are applying it in bands we can bang it on at a much higher rate than we could as a blanket dose and even then we are applying far less than before, helping to reduce our growing costs.

“You really see the difference in the crop.

This year we had a bout that missed out on the fertiliser and you can see it is markedly behind the rest of the field.

“That could make or break us in a year where flea beetles are an issue.”

In the main, blockages aren’t too much of an issue, although the nozzles are checked every morning and all but one can be seen from the cab.

The simple RDS controller is easy to fathom and has performed as expected, although rates are rarely altered.

Having seen success in the rape, for the past three years Mr Ireland has been using a 87-litre/ha dose of 7:20:0 starter fertiliser on second wheats, which he believes has helped bring their yields up much closer to the firsts.

“It costs us about £31/ha to buy and apply the fertiliser and I feel that is a price worth paying, especially if we can get our second wheats really performing.”