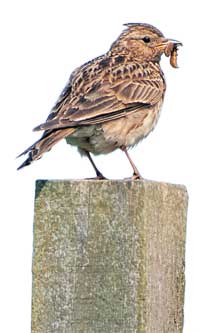 Farmers in East Anglia have been asked to leave uncropped areas in their fields to help increase the population of skylarks.

The RSPB said farmers should leave 16sq m plots of unsown areas in fields to help the birds forage for food and insects.

It hopes the “skylark plots” will halt the decline skylarks, whose numbers have halved in the past 40 years.

The RSPB said the plots can be created by the farmer simply switching off the drill while sowing seeds, or areas being “sprayed out” after sowing the field.

Pilot trails of the plots showed they improved reproduction and breeding productivity by 50%.

Pairs of the iconic farmland bird at the charity’s Hope Farm in Cambridgeshire went up from 10 to 44 in the last decade.

An option under environmental stewardship schemes, the plots would account for less than a third of 1% of a hectare.

Chris Bailey, RSPB farm manager, said the plots were a simple solution which could be implemented quickly.

“It’s easy to fit into the farming system and it makes economic sense,” he said.

Research conducted by the RSPB found that if 10-20% of winter wheat crops had skylark plots in them, it could rapidly reduce the declining rate of the bird – and have additional breeding benefits for other species, such as yellow wagtails.

Large declines of farmland birds in recent years mean the skylark is “red-listed” for conservation action.