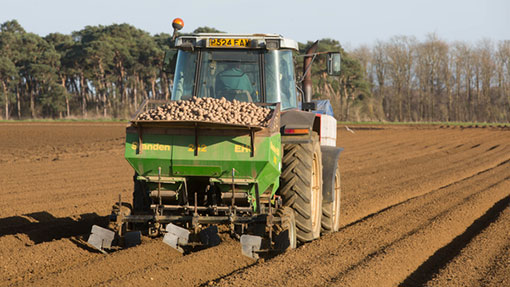 Farmers should be “loud and proud” of potatoes and teach the public about the benefits of the nation’s No 1 source of carbohydrate, says the new leader of the Potato Council.

As part of Potato Week, which runs from 6-12 October, the Potato Council is pushing three main aims – promotion, production and protection of the potato sector.

“Potato Week is all about celebrating the potato and encouraging families to become interested in named varieties,” said Fiona Fell, chair of the council.

“The focus is on helping consumers shop for potatoes far more intuitively; choosing varieties based on taste, texture and how they perform rather than price or appearance.

Potatoes account for more than 80% of the retail carbohydrates market by volume.

They are a naturally fat-free source of fibre and vitamin B6, have more potassium than three bananas, a lower environmental impact than rice and pasta and contribute £4.7bn to the UK economy.

Autumn is a crucial time for consumption and Potato Week is deliberately timed to coincide with main crop harvesting.

Although there is roughly one-third of the UK potato crop still to harvest, current market conditions were of great concern to many Potato Council levypayers, causing severe difficulties for some growers, noted Ms Fell.

“Our market intelligence shows steady growth in processing volumes but a decline in fresh. However, this rate of reduction has thankfully eased throughout the summer months.”

As 2014 growing conditions have been favourable, there is increasing certainty of an ample supply this season.

“It’s not confined to GB, we’ve seen a concerning estimate of a large crop in northern Europe from the NEPG, which will exert market pressure in GB,” added Ms Fell.

“We’ve already seen French farmers buy back their own potatoes from retailers in protest and Irish farmers camped out at retailers’ HQs.”

The Potato Council is also encouraging and supporting research funding bids for AgriTech and Innovate UK funds to underpin development in the sector. In addition, the council has just submitted a bid for EU funds, which, if successful, will double resources in this area over the next three years.

Read also: Potato harvest progress up on past two years