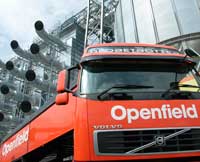 Plans to build another grain store have been announced by Openfield.

The 85,000t “Advanced Processing Centre” at Snetterton in Norfolk will form part of the co-op’s nationwide grain supply network and will be modelled on the new Camgrain store east of Cambridge.

A 23-acre site has been secured, but detailed plans will not be unveiled until 27 May when local growers will be asked to “sponsor” the project at an open meeting.

“This is an ideal location with excellent logistics, with the region having a combined production of 2.8m tonnes of grain every year,” Openfield’s head of central storage, Rob Sanderson, said. “Initial planning discussions with Breckland Council have been very encouraging.

“Farmer members of the new partnership who need to store their grain centrally prior to the opening of the proposed facility will be able to use other stores within the network as part of the deal,” he added.

East Bradenham farmer David Hill is on the steering committee for the project. He says the region desperately needs a new store if farmers are to gain more value from the grain produced.

“Many of our on-farm stores – mine included – as well as a number of independently-run facilities in the region – are not up to scratch. They are antiquated, simply can’t cope at harvest and don’t have the capacity to store grain to high enough standards.”