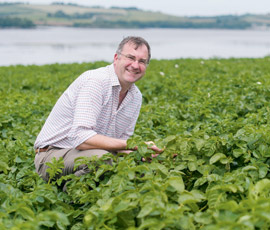 Jeremy Oatey is putting Cornwall on the arable map. He has built a highly profitable arable business by pushing crop yields and identifying key market outlets.

Average wheat yields of 8.3t/ha (often exceeding 10t/ha) are impressive for this wetter and disease-prone part of the country. He also supplies the key ingredients of wheat, onions, swedes and potatoes necessary for local delicacy the Cornish pasty.

Back in 2004, he established Agricola Growers when he took on a 120ha contract farming opportunity on the Antony Estate, near Torpoint, growing daffodils for export to the USA and potatoes.

Over the next nine years, he expanded the business nearly tenfold and turned around the estate’s vegetable-washing business, which he eventually bought.

His business is now the largest supplier of peeled onions, swedes, potatoes and wheat to local pasty makers, as well as supplying the local NHS trust and food service businesses.

“It was great to meet and visit this year’s three finalists, each from quite differing regions, but with the common goal of making the most of the opportunities they created.”
Jock Willmott,
Strutt & Parker

About 10% of onions are home-grown, but most are bought in from Lincolnshire. Not content with this, he aims to expand “grown in Cornwall” onions to 30-40%, despite the challenge of the wet south-west climate and the risk of skin staining.

His other premium crops are potatoes and daffodils. Most of his 138ha of potatoes are for processing, with the pasty manufacturers preferring yellow, waxy types.

Jeremy’s reputation as a top arable grower meant he only had to tender for 10% of the land when expanding his area during the past decade, as he was approached by landowners and land agents to take on their land.

Technology has proved valuable in overcoming the inherent variability of the land in Cornwall, by bringing up the poorer performing areas. Most land has been mapped and he variably applies potash, phosphate and lime, with plans to adjust seed rates.

His aim is to average 10t/ha for wheat and he believes this is achievable, with some areas already delivering double-digit yields.

The wider Cornish farming community is also benefiting from his experiences through his role as chairman of the Kernow Grain co-op. He is also a director of Cornwall Farmers, a farmer-owned supply co-op with 12 stores in Devon and Cornwall.

He works with his local school, showing children where the key ingredients for the county’s renowned pasty are grown by hosting visits when harvesting potatoes.

Coming from a non-farming background, he recognises the industry’s responsibility in helping new entrants and he does his bit by taking on a Harper Adams University sandwich student each year.

“We were very impressed by how Jeremy Oatey has developed his diverse and progressive business in a very short time by matching products to the market.”