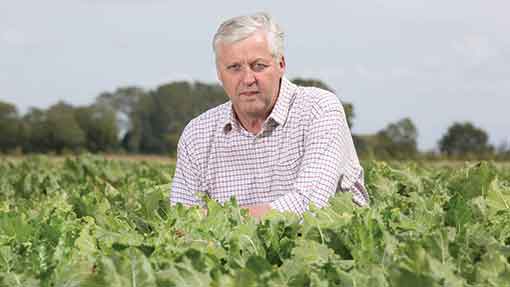 Poul Hovesen is the complete arable manager, whether he is directing his tightly-knit team, chatting to scientists crawling over his farm or educating crowds of school children.

Some 27 years in England has taught the Danish-born Mr Hovesen the benefits of getting his soils into good shape for winter wheat to yield up to almost 13t/ha.

Poul is an excellent leader, supporting new entrants to the farming industry, spreading his technical knowledge and experience and also developing harmony within his team.
Peter Brumpton, crop consultant and independent judge

A seven-year rotation including two or three spring crops has allowed him to virtually vanquish blackgrass, improve his soil structure and double farm output in seven years.

“We need to stand back and think, and respect Mother Nature and the soil, as we need a sustained agriculture in a more open market,” he adds.

Mr Hovesen arrived in England from his native Denmark in 1987 to take up the role of arable manager at the 2,016ha Salle estate, some 12 miles north-west of Norwich near the village of Reepham.

He worked on finding a rotation to help improve the soils and spread the harvest workload from early-cut winter barley to late-lifted sugar beet.

Mr Hovesen settled on a seven-year programme and, together with liberal use of the plough, this has helped reduce blackgrass to a minor irritant.

“When I arrived at Salle there was a lot of blackgrass – now there is hardly any. I am very pleased we got our house in order before we started to get blackgrass resistance,” he says.

The spread of crops to harvest has kept labour costs down, with just seven full-time farm staff, five of them under 30, and one combine to cut nearly 2,000ha of combinable crops.

The farm is also involved in trying to cut levels of water pollution into the local River Wensum, with monitoring by the University of East Anglia and funding by Defra and the Environmental Agency.

The aim is to test on-farm measures to cut pollution while maintaining food production, and trials are taking place across 143ha of the estate with researchers testing water from the farm drains.

Work using cover crops such as oilseed radish is under way to see how these overwintered crops can hold nutrients and may cut fertiliser requirements for subsequent crops.

“Ideally we would not have winter stubbles and have cover crops ahead of crops such as spring beans and sugar beet,” Mr Hovesen says.

He also finds time to organise countryside classrooms, where in excess of 800 school children, aged seven to 11, descend on the farm to understand how their food is produced.

In addition, Mr Hovesen took on the management of the separately owned nearby Holkham Estate, close to the north Norfolk coast, with 3,000ha of arable land at the end of 2011.

It is perhaps appropriate given Mr Hovesen’s focus on crop rotations that taking on Holkham brought him to the home of the famous Norfolk four-course rotation. 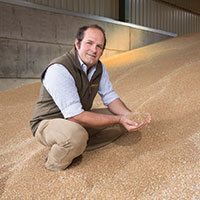 Tom has developed a small family farm into an arable contract farming operation of more than 1,600ha. One of the stars of the BBC’s Harvest programme last year, he puts his Nuffield study of soils and crops around the world to use in his day-to-day management. 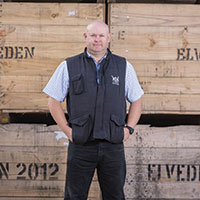 Andrew helps produce a plethora of crops on the largest arable farm in Britain. Irrigation is key on this light land Breckland estate to grow vegetable and cereal crops while helping to preserve healthland and protect rare birds, such as the stone curlew.

“These excellent finalists demonstrate that attention to detail is key in delivering a profitable arable enterprise, with the drive to achieve high yields in all crops.”