Guy Shelby is a member of the exclusive 5t/ha oilseed rape club, has wheat yields that are into double digits and last year, his beans averaged 7.5t/ha. 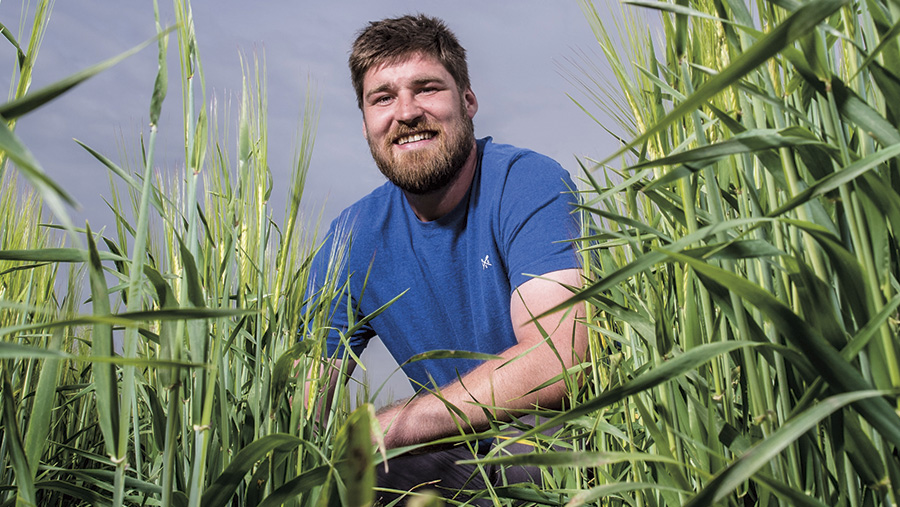 But what makes this even more remarkable is that it is being achieved while farming difficult soils at sea level and getting on top of a blackgrass problem.

Guy puts part of this success down to his switch to strip-tillage three years ago combined with a greater focus on promoting soil health. He made the bold move in an area where power harrowing is still king.

Each soil type has its challenges.

The clay is difficult to work and the high organic content means pre-emergence residual chemistry has limited efficacy.

The changes started when Guy returned home from Harper Adams University. He had spent time working in New Zealand and questioned the cultivation system being used back at home.

Guy first moved to a subsoiler-based system for establishing oilseed rape and rapidly saw benefits, including a jump in yield.

“I was doing the spraying and could see a difference.

“We were getting on fields sooner in the spring compared with the conventional tilled areas.”

This prompted him to look at reduced tillage and in 2013, he bought a 3m Mazuri strip-till drill.

One big benefit has been the cost saving, effectively halving establishment costs.

“For example, the second wheat crop costs £90/ha to establish.”

Guy is an adopter of technology, using yield mapping to variably adjust seed rates to achieve more even plant populations. He is also variably applying P and K.

Marketing-wise, he sells one-third through pools, one-third forward and the rest is flexible to spread risk. Another part of his risk management is to grow at least four wheat varieties.

With cereals, Guy is looking to add value moving from feed wheat which earned a £2-3/t premium supplying the local Vivergo biofuel plant to milling wheat and he is also trialling malting barley.

Like many growers, he has a resistant blackgrass issue and has seen some success in managing it. A key part of his strategy is growing vining peas for Birds Eye in a one-in-six-year rotation.

“This acts as a reset button, as it has to be established after ploughing.”

You just have to look at the field where his blackgrass problem first started, which had more than 300 plants/sq m.

Now after a combination of measures, it is clean enough to be hand rouged.

He is passionate about shooting and believes this goes hand-in-hand with wildlife – providing habitats.

He takes pride in seeing buzzards, kestrels and barn owls and is keen to provide different habitats through higher level stewardship.

Looking ahead, he believes the system is more sustainable and even in the three years since he started strip-tilling, soils have improved.

His vision is to take on more land and not being content with double digit wheat yields, he has raised his yield targets.

“We achieved yields of 12t/ha last year and now hope to set that as our benchmark average.”

“Guy Shelby is a very deserving winner of Arable Farmer of the Year. He is optimistic, flexible, innovative, knowledgeable and results oriented – all attributes that are essential for sustainable crop production success in our current climate”