A combination of livestock and arable enterprises – and a West Country cider orchard – makes Robert Davies a worthy winner of the Mixed Farmer of the Year Award.

“We’re a true Herefordshire mixed farm, but it hasn’t happened by accident,” says Robert. “It has been a planned strategy since the 1970s and early 1980s, when we were a specialised dairy farm.” 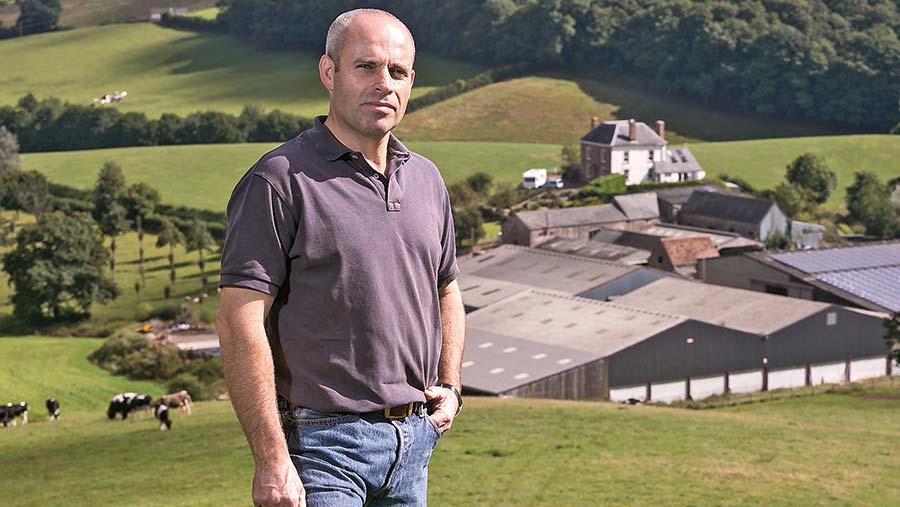 A 100-cow dairy herd, milked through two Lely robots, remains an integral part of the business. But other enterprises are also fundamental to the farm, including cereals, beef, sheep, 30,000 turkey stags and 600t of apples grown a year.

The business is a family partnership between Robert, his parents, and wife Rachel. While Robert manages all the enterprises on the farm, Rachel runs the farm office and deals with record keeping, accounts and other paperwork.

A strong believer in the co-operative model, Robert is an Arla member, with milk production specially tailored to best suit the contract.

“Their brands help give us confidence,” he says. “A premium over own-label dairy products will, I believe, secure long-term profitability.”

All cattle are home-bred, with beef cattle taken through to slaughter. The very best prime Simmental-cross cattle are sold directly to the public through a beef-in-a-box scheme.

Animal welfare and cost management are both a key focus. “Poor welfare means poor profit,” says Robert. “We have recently invested in mattresses for all the cubicles, reducing hock damage to zero, and we’ve installed an area of rubber matting for the cows to walk on.”

Turkey stags are produced on contract to Faccenda Foods year-round.

This is operated as a managed margin system, which doesn’t guarantee a positive margin but does make returning a profit achievable in contrast to the challenges facing the dairy and beef sectors, says Robert.

Cider apples are produced under contract to Magners, which owns the Shepton Mallet cider mill, producing several premium brands including Blackthorn and Gaymers.

“It is an acreage contract so maximising yield is desirable and we liaise directly with the factory,” says Robert.

Having just completed its second entry-level environmental stewardship scheme, the farm has now embarked on a mid-tier Countryside Stewardship agreement.

Championing farming to customers and the wider public is important, too. The farm took part in Open Farm Sunday for the fifth time this year, and regularly hosts school visits, attracting hundreds of visitors annually.

Plans for the future include ensuring that the farm remains a viable business ready to hand on to the next generation.

“Over the next five years, we intend to continue to expand, particularly with stock numbers and rental property. I don’t see a dramatic improvement in the milk price as very likely, so I will focus on continued improvements in technical performance.”