Big contrasts in the fortunes of growers coping with the wettest autumn many can recall are reflected on Farmers Weekly’s Barometer farms.

In Dorset all Peter Snell’s planned winter cereals had been drilled and sprayed by last weekend. Beans were Mr Snell’s only unsown crop, but he hoped to min-till them in, if necessary on frosted land.

In Kent Andy Barr completed sowing by early October and was mainly concerned with keeping pigeons off oilseed rape.

But in Northern Ireland, James Wray had lifted only 25% of his 100ha (250 acres) of potatoes and drilled nothing. “We only put the combine away three weeks ago and we gave up on four acres of wheat.”

Had it not been for having nearly half his potatoes on pump-drained reclaimed land and investing in a self-propelled tracked harvester, Mr Wray believed progress would have been even slower. “But these spuds have to be harvested to keep our heads above water.” The one bright spot was that the quality remained good.

Ian Bird near Hartlepool was little better off, with less than half his intended winter cereals in and nothing sprayed. “This autumn’s been as bad as I can remember,” he said. “I’ve given up tipping out the rain gauge. It can only get better.”

None of his intended winter oilseed rape got sown. “Most crops round here only have two cotyledons,” he added. And he was still busy drying wheat – some for the third time after it began to heat in store. Spring rape plus beans and barley looked set to fill his unsown land. 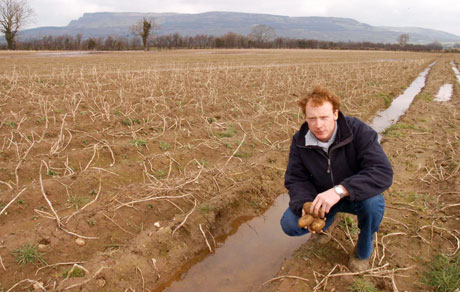 Mike Eagers, in Scotland, was also well behind and he expected a big increase in spring barley. “We managed to drill 80% of our 153ha of rape, but 30% of that is touch and go. We’ve only 40% of our winter barley done, which will have a knock-on effect on 2010 harvest, and only 55% of our wheat in. We’re still drilling even though SAC advises us to stop. On the plus side, I have sold 800t at £150/t for next harvest.”

In the midlands, Tony Reynolds had only 10% of cereals unsown, but said conditions were “beyond challenging”. He had no plans yet for his unsown land and the 10ha (25 acres) of winter barley lost to flooding. Other areas were also struggling.

“I fear another 10% may not be good enough. We’ve a lot of grains swollen, but just not germinated. Whether that’s self-inflicted [by direct-drilling] I’m not sure, but a lot of our neighbours’ crops look similar.”

Chris Moore in the east described fieldwork as “desperate”. He had only 70% drilled up and badly delayed, with beetroot lifting on soils at field capacity for more than a month. Mr Moore had let some unsown land for potatoes, but was not sure what to do with the rest. “I think it will probably be spring barley – we can do 2.5-3t/acre.”

Simon Collins, in the west, was still ploughing in beans. He was also waiting to see how 100ha (250 acres) of oilseed rape, some of which was re-sown in mid-October, performed. Early wheat sowings had received herbicide. “But the only thing moving in some fields is the quad and slug pelleter,” he said. He was prepared to drill the remaining Soissons wheat in mid-January.