Farmland bird numbers in England have fallen to their lowest-ever numbers, according to latest figures from DEFRA.

Populations of farmland birds decreased by 3% between 2008 and 2009, taking their numbers to 53% lower than their 1966 starting value.

According to the to the farmland bird index, kestrel, lapwing and grey partridge were among six species which saw significant decline over the 12-month period.

In total, populations of 12 farmland bird species fell, for many continuing a five-year decline in numbers.

Bird populations are considered to be a good indicator of the state of wildlife as they occupy a variety of habitats and tend to be near the top of food chains.

According to Mark Avery, RSPB director of conservation, the decline may be due to a cold winter and the loss of set-aside.

“Lapwings – known to some as the ‘farmer’s friend’ – are particularly vulnerable and their populations have been steadily falling for more than 30 years, so a decline of 12% in one year across England is really bad news,” he said 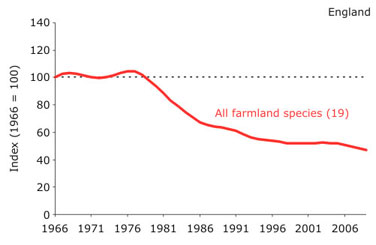 “Those farmers who are helping to save this bird through the Higher Level Stewardship are achieving some great results. So to cut this important environmental scheme now could be disastrous.”

Dr Avery said the latest figures also revealed a five-year decline of 10% in farmland birds, showing Entry Level Stewardship as not working as well as it should.

“There are many different options in the ELS scheme but unfortunately we are not seeing the right options used in the right ways,” he said.

“Farmland birds need farmers. The NFU and CLA-led Campaign for the Farmed Environment aims to boost wildlife-friendly activities on farms. These results show how crucial this effort is.

“The Campaign has the RSPB’s full support and we applaud those farmers who are adapting their farms to care for wildlife as well as producing high-quality food.

“We just need more people to join in.”