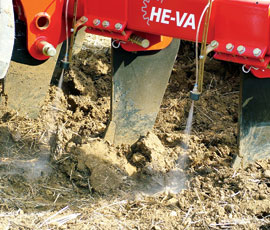 Banding nitrogen and phosphate fertiliser when planting oilseed rape in the autumn could significantly improve establishment, judging by the condition of current Agrovista trial plots.

Plots planted with liquid nitrogen and phosphate in the autumn had a higher number of plants per square metre, said Robert Purvis, a Kent-based agronomist for the firm.

“They also had a slightly higher green leaf area index when we tested on 25 October,” he told visitors to a grower meeting on the Isle of Sheppey, Kent.

Three trial plots were established on the Isle of Sheppey site in the autumn using a He-va subsoiler and band-seeding unit fitted with a liquid fertiliser applicator.

The first was planted with no seed-bed fertiliser and the second received 46kg/ha nitrogen, equivalent to 15kg/ha nitrogen over the whole field, as well as 21kg/ha phosphate.

“All crops established well behind the He-va machine and I keep changing my mind on which will yield best. However, I’ve been impressed with the fertilised crops right from the start.”

The 46kg/ha nitrogen and 21kg/ha phosphate plot had the greatest number of established plants and the 92kg/ha trial was slightly lower, he said. “That could just be a quirk of trials, but we did wonder whether there was too much nitrogen and it was causing a problem coming into contact with seed.”

On another Agrovista site, zero seed-bed nitrogen was being compared with CoRoN, which is a controlled release nitrogen product in liquid form, as well as 30kg/ha granular nitrogen.

So far, CoRoN appeared to be better than the zero nitrogen plots, but looked further behind the bagged nitrogen trial, said Mr Purvis. “If restrictions become tighter on how much nitrogen we can apply in the autumn, the really low rates of nitrogen in CoRoN in a solution or formulation could be quite effective. It’s something that warrants looking into further.”

Results from last year’s seed-bed nitrogen trials didn’t show a clear yield benefit, but there was still a good case for using it, said Niall Atkinson, trials co-ordinator for Agrovista.

“I’d still advocate using it as a means of achieving even establishment. It is crucial this is applied in the seed-bed at the time of planting and not broadcast once the crop has emerged and is suffering from deficiency.”

This year’s trials will also be taken though to yield.