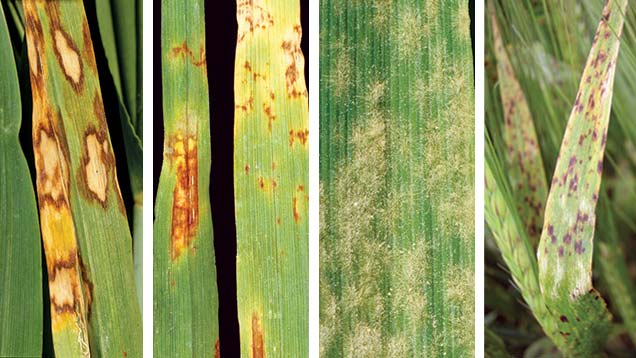 Barley growers face a tough battle against disease this season, with some experts warning of a worse disease year than 2014.

With many early-drilled crops, thick growth and mild weather, there are already clear signs of the crop’s big three yield-killers – rhynchosporium, net blotch and mildew – while late season ramularia could well strike.

Scottish disease expert Fiona Burnett predicts this season could well be worst than last year for barley growers with so much disease inoculum around from last season.

“The disease levels we are seeing in barley are worse than normal with rhynchosporium, net blotch and mildew all there,” she tells Farmers Weekly.

Only sustained cold weather could reduce the disease threat, and so far there have been only small patches of cold and frosty conditions.

The one advantage that barley growers have over those who grow wheat is they can chose between more types of fungicides for control and reduce the risk of fungicide resistance.

They can pick from five different types of systemic fungicide groupings compared with the three types generally used in wheat.

Whereas a wheat grower’s systemic arsenal is largely limited to azoles, SDHIs and strobilurins, the barley grower can add morpholines and also the product cyprodinil.

“Over the three timings, growers should be able to use all five systemics to help limit the risk of fungicide resistance,” says Dr Burnett, who is crop protection team leader at Scotland’s Rural College (SRUC).

Her approach for the first fungicide of the season at the T0 timing, usually applied in March, would be to go for a morpholine and cyprodinil mix to focus on early disease eradication.

This is aimed at giving good early “kickback” control but not great persistence, and as this is aimed at eradication she would not use protectant products such as chlorothalonil.

Her trials at the SRUC showed a 0.3t/ha yield boost from using a T0 spray in winter barley, so a cheap-and-cheerful approach seems sensible and keep other chemistry for later problems.

In addition, she looks to preserve azole fungicides for later timing where they can be used to get bigger yield responses and prevent fungicide resistance building up.

The biggest fungicide response for winter barley comes at the T1 timing (GS30-32) when a 1.5t/ha yield boost was seen in 2014 SRUC trials, and so fungicide choice here is key.

“The T1 spray is all about building yield so this is where growers should be making the biggest investment,” she says.

This T1 timing, usually in April, is likely to be azole-based, and here prothioconazole is the most popular because of its effective disease control in barley. For this reason, it is estimated that more than 80% of all UK barley crops get at least one application.

A partner for prothioconazole could be either a strobilurin or an SDHI depending on the disease pressure in the season.

The strobs were introduced into the UK in the late 1990s, but mildew and ramularia became resistant to the fungicides and net blotch shows partial resistance.

“The azole/strob combination will be strong on rhynchosporium, while the SDHI gives a broad spectrum to control net blotch and mildew,” she says.

The protective multi-site chorothalonil could also be added to boost overall disease control.

Choice of products at the later T2 timing (GS39-49) will depend on disease pressure and especially the late-season risk of ramularia.

Work on the risk of ramularia is being undertaken at the SRUC and a risk assessment based on leaf wetness around the start of stem extension gives a good forecast of the likely severity of the disease later in the season.

SDHI fungicides are rated very good against ramularia while the azole prothioconazole and chlorothalonil are both assessed as good/very good.

The yield response to applying a T2 spray, usually in May at the boot-splitting time when the barley ear is just revealed, was 0.9t/ha in 2014 SRUC work.

Ramularia tends to be more problematic on spring barley crops compared with the winter equivalent.

This is partly because spring varieties are often more susceptible and also because the spring crop is more dependent on late green leaf retention to drive yield since it is a shorter duration crop.