A dramatic decline in the performance of several fungicide groups against ramularia means that chemical control choices in barley have narrowed to just one mode of action.

As a result, a multi-site protectant should be included at booting (T2) in spring barley crops, as it is the only option left for ensuring upper leaves remain clean and ramularia controlled.

Two years ago, the azoles and SDHIs were still doing a good job of controlling the disease and growers had a range of chemical options at their disposal.

See also: Tips on how to correctly identify ramularia in barley

But by the end of 2017, insensitivity to azoles and SDHIs in ramularia had been confirmed, with the AHDB-funded fungicide performance trials highlighting that the only fungicide products that showed a response to the disease were those containing the multi-site protectant chlorothalonil. 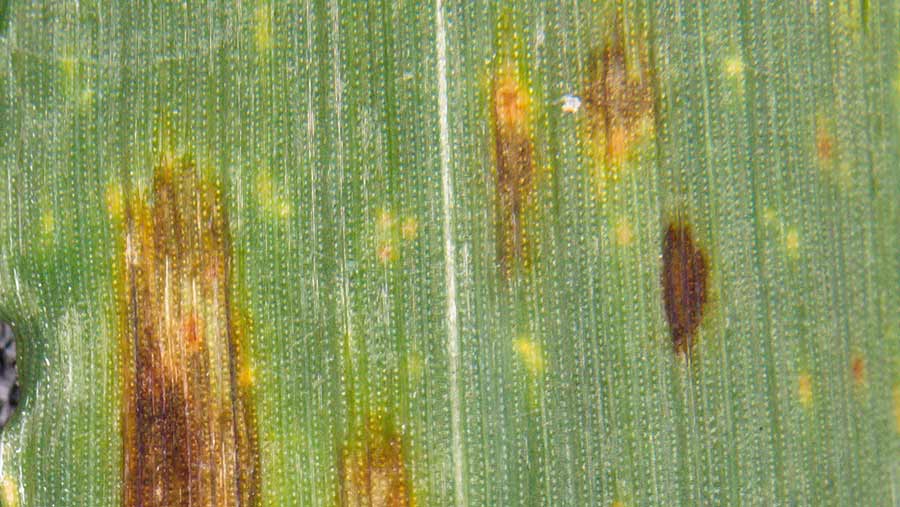 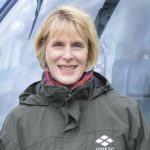 With three groups of fungicide chemistry now ineffective against ramularia, it leaves one chemical defence against the relatively new disease, which has the potential to damage the upper leaves after flowering and cause yield losses of up to 0.6t/ha.

For growers in both Scotland and England, this is very worrying, says Scotland’s Rural College’s Dr Fiona Burnett, who points out that resistance in ramularia has developed very quickly.

“It has all happened in just two seasons, rather than the gradual decline that has been evident with other diseases.”

The drop off in performance has been very severe, with England only just ahead of Scotland in terms of field efficacy, she reports.

“It followed a shift and smash pattern, which is why the response curves are now flat lines. The azoles and SDHIs are ineffective on the disease now.”

The first warnings that there was a potential problem in ramularia came from Germany in early 2017, when two mutations were confirmed – one that affected the SDHIs and one that had consequences for azoles. Both mutations had a severe effect, rendering the chemistry ineffective.

At the time of their discovery, it was unclear whether the UK would follow the same path, as field performance of fungicide programmes in 2016 had been good.

However, that wasn’t the case in 2017, especially in Scotland, with growers and agronomists reporting poor control from comprehensive fungicide programmes.

“We’re in a period of uncertainty with barley,” continues Dr Burnett. “As well as the ramularia situation, there is reduced sensitivity to the SDHIs in net blotch and a decline in the performance of strobilurins in Rhynchosporium.”

Her advice is to use some chemical diversity in spring barley fungicide programmes, as well as tailoring fungicide use to risk at T1 and then topping up at T2, including chlorothalonil for ramularia.

Varietal resistance to ramularia doesn’t alter much, she adds. “All the recommended varieties are 6s or 7s for the disease, so they behave very similarly.”

That will improve, she predicts, given that the disease is relatively new and resistance to it wasn’t a priority for plant breeders until recently.

“We need better resistance – it’s part of the reason why the chemistry is struggling.”

Ramularia is a very challenging disease, agrees Andy Bailey of Adama. He points out that it is seed- and trash-borne, but there aren’t any effective seed treatment products for controlling it.

“It is also asymptomatic,” he points out. “So it can be already in the plant, without any signs, until the crop gets stressed. Then it manifests itself, usually on the top leaves.”

Mr Bailey suggests an integrated approach to reducing the risk of the disease, but stresses that the T2 timing is an important part of any control strategy.

“Look for the most resistant varieties on the list and use cultivations to bury any trash that may be infected,” he advises. “It is also not a good idea to use farm-saved seed from a crop that was infected.”

Chlorothalonil has good activity against the disease and is the most effective, but there are other multi-site protectants that can be used in spring barley.

“Folpet, especially in mixtures, is interesting,” says Mr Bailey. “It can be used as an alternative to chlorothalonil, has Rhynchosporium control on the label, will not interfere with the uptake of other products and also brings intrinsic activity on brown rust.”

“There’s work being done to look at the use of multi-sites at both timings where ramularia is a concern, as we need to know whether the T1 treatment can help.”

Independent agronomist Philip Simons of Prime Agriculture will be adding multi-site chlorothalonil to the T2 timing in 2018 – something he did last year after seeing beneficial results in trials.

His standard approach will be to include chlorothalonil at T2, with other disease control strategy decisions being made closer to application time, once disease levels have been assessed.

“We know that there is a requirement to keep azole rates up and to mix and match actives at both timings to ensure good disease control – that’s the same for winter and spring barley,” he says.

In winter barley, he only uses a T0 on the more susceptible varieties, such as Maris Otter, where a typical mix would be a morpholine with cyprodinil.

Otherwise, hybrids have a three spray programme in most seasons, with conventional barley receiving two sprays. The T1 targets tiller retention and the T2 has an SDHI component, plus chlorothalonil.