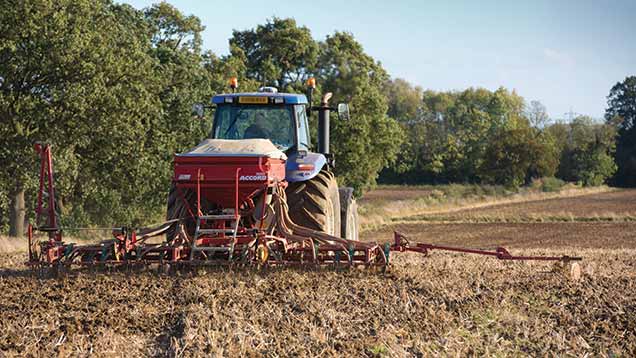 The first SDHI-based fungicide seed dressing for wheat is set to be launched next year, offering yield advantages over rivals.

The world’s largest agrochemicals group, Syngenta, says this seed coating offers good control of of seedborne and soilborne diseases and give a yield bonus worth £34/ha over competitors.

The wheat seed treatment contains a new SDHI fungicide, sedaxane, with two other fungicides, and is being referred to as Sedaxane 3-way as it has three modes of action from its different components.

“We are hoping for an approval in the early part of 2016 so it can be sold in the autumn of 2016.”
Michael Tait, Syngenta

The group’s seed dressing expert, Michael Tait, expects the product to set new standards in the UK industry and give good control of diseases such as fusarium and microdochium, while it is already available in France as Vibrance Gold.

“We are hoping for an approval in the early part of 2016 so it can be sold in the autumn of 2016,” he told a briefing at the group’s Jealott’s Hill research centre in Berkshire, west of London.

In European-wide group trials, the Sedaxane 3-way product gave a 0.61t/ha advantage over untreated winter wheat crops, which is worth £73/ha with wheat priced at £120/t, and a 0.29t/ha gain over standard seed treatments worth £34/ha.

The product will enter the £50m-£60m annual UK cereal seed dressing market next year, which the agrochemical giant sees expanding to £80m-£100m by 2020.

The SDHI component is particularly effective in controlling microdochium and rhizoctonia diseases, while the other two components – the azole difenoconazole and the phenylpyrrole fludioxonil – give good fusarium control. The latter is used in the seed coating Beret Gold.

These seedborne and soilborne diseases cause conditions known as damping off and footrot, and can lead to significant loss of plants.

The group sees the new seed dressing as helping to meet the challenge of improving root health and rooting ability and assisting in breaking through the yield barrier faced by many growers.

The SDHI component is being developed just for the seed coatings market as it is not sufficiently mobile in plants to control foliar diseases such as rusts, but it is taken up readily by plant roots.

“We see it giving a high level of disease control and being the new product to beat in the market,” Mr Tait added.

The Sedaxane 3-way product is already available in France, Italy, Poland and the Czech Republic. There are no plans to launch a fungicide plus insecticide product such as Redigo Deter.

A seed coating for barley based on the SDHI sedaxane is planned for 2017 with different partners to the Sedaxane 3-way product for wheat.

The Swiss-based group also plans to launch its foliar SDHI Elatus (solatenol) in the UK in the spring of 2017, which was the group’s biggest ever product launch when it was introduced in Brazil last year for use in soya beans.