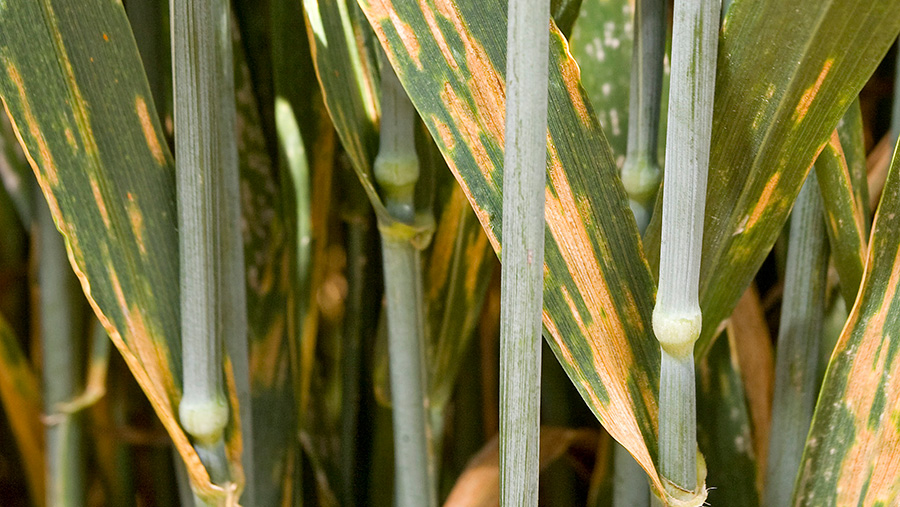 The first sign of resistance to SDHI fungicides has been detected in a UK wheat field with a mutation in the disease septoria being discovered to have less sensitivity to these key pesticides.

The septoria isolates found in southern England were classified as having medium-to-high resistance to SDHI fungicides, which are included in popular products such as Aviator, Adexar, Keystone and Vertisan.

These septoria isolates carry the same mutation as detected in Ireland in 2015, which survived up to 100 times the SDHI concentration compared with the most insensitive isolates found in previous years.

These mutations which make septoria isolates less sensitive to SDHIs were discovered as part of an AHDB monitoring project led by Rothamsted Research.

These resistance strains were found at very low levels, and the AHDB says the discovery has no significance for septoria control this season, but it advises growers to stick to current guidelines.

“As these isolates display a higher resistance factor, it has a greater potential to spread in field populations under SDHI fungicide selection pressure than previously reported mutations,” says Bart Fraaije, lead researcher on the project from Rothamsted.

Paul Gosling, AHDB research manager, says the implications are as yet unknown, especially as the frequency of the isolates was low, with only two isolates from 144 collected in the southern English field found to have the mutation.

He adds because of the low frequency, the field performance in 2016 is unlikely to have an impact and says that some mutations only spread slowly or not at all.

“However, it is a timely warning for growers ahead of the 2016 spraying season that the threat from fungicide resistance must be taken seriously and all appropriate resistance management strategies must be deployed in the field,” he says.

The SDHI fungicides along with the azoles are the two main systemic fungicide groups used against wheat’s most damaging disease septoria, and the SDHIs have become more important as the effectiveness of the azole are on the decline.

Guidelines say growers should use no more than two SDHIs in a season, while they should always be used in a mixture with at least one other fungicide with an alternative mode of action.