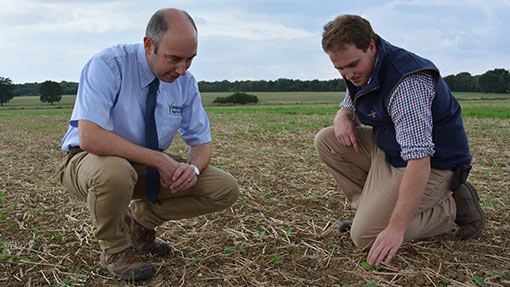 Oilseed rape growers are being urged to report problem crops this autumn as industry leaders step up calls for the return of neonicotinoid seed treatments.

Eastern region rape usually protected by neonicotinoids has been inundated with flea beetle this autumn following withdrawal of the seed treatment. Crops have been written off in Cambridgeshire and Hertfordshire. Heavy infestations have been reported in other counties.

Essex grower Ed Ford (pictured with agronomist Graham Brooks), who farms at Roxwell, near Chelmsford, said he had sprayed against flea beetle twice within four days to save rape drilled into perfect conditions. “It is a constant struggle,” he told Farmers Weekly. “We are out every day to make sure no damage is being done.”

The NFU is lobbying for the return of neonicotinoids as part of its Healthy Harvest campaign. The union argues that the EU decision to restrict the use of neonicotinoids for at least two years is unscientific. And it disputes claims that the chemicals kill pollinators.

“Good, old-fashioned farmer pride” meant growers were understandably reluctant to report crop failures, said NFU vice-president Guy Smith. But it was important that the NFU gave the government a good account of losses suffered when establishing rape this autumn.

Mr Smith said: “In July, we supported an application that would allow growers to use a more effective product for flea beetle control than the ones they currently have for autumn use. It was a non-pyrethroid insecticide that didn’t contain banned neonics.

“Despite our recent repeated calls to allow its use when growers were losing rape crops to insect damage, the authorities concerned simply sat on their hands and left growers at the mercy of what was clearly becoming a flea beetle epidemic.”

Widespread resistance to pyrethroids in UK flea beetle populations mean growers have an additional challenge on their hands when tackling the problem. Any decision to apply pyrethroid insecticides must be based on risk, said the HGCA.

Failure to do so would place additional selection pressure on resistance mechanisms and could result in further control issues in years to come. If a pyrethroid application was deemed necessary, it should be applied at full recommended field rate.

Prime Agriculture agronomist Graham Brooks, who has clients across Essex, said: “The big problem is that we’ve only got pyrethroids to spray with. And we know that there is confirmed resistance [to pyrethroids] in the county, but we don’t know where or how widespread it is.”

This meant growers were effectively forced to spray crops without knowing whether doing so would control flea beetle, said Mr Brooks. “Even where spraying works, you can look at a crop the day afterwards and find flea beetle is back at pre-spray levels.”

Legume mixes and individual legumes such as clover, vetches and black lentils are being grown in oilseed rape crops at Frontier’s trial site at Haywold, near Driffield, East Yorkshire. The theory is that flea beetles attack the companion crop, leaving the rape to grow unhindered.

Full trial results will be available after the crop is harvested next year. But an initial count is expected within the next few weeks. The trial already looked promising, said Frontier seed development manager Paul Brown.

“The idea has come to the UK from France, where people started to grow companion crops to put extra nitrogen into the rape crop. Autumn nitrogen applications are banned in France, so the idea was to use legumes to fix nitrogen in the rape crop.”

French data suggested that companion crops reduced flea beetle damage, said Mr Brown. “That is what we are trying to emulate. We have tried broadcasting the companion crop first and drilling the rape through it, as well as drilling both at the same time. It is an ongoing project.”