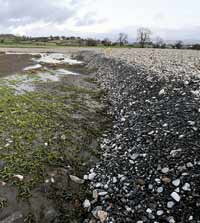 Farmers and landowners hit by the autumn floods in Cumbria have called for an increase in compensation as clean up bills continue to rise.

Although there has been an extension until the end of February for applications for compensation there are now fears there will be a sudden rush to try and get fields cleared to meet the end of June deadline for the completion of the work.

Outside contractors are already stretched and charges could escalate. One farmer, who asked not to be named, told Farmers Weekly he’d been quoted £30,000 to clear two acres of land covered in gravel from a nearby river bed.

Meanwhile, at the first farm in Cockermouth to complete the clearance of gravel, costs have exceeded £15,000 – more than double the £6800 limit allocated by DEFRA to the worst hit farms.

Bulldozers have been working for six weeks at Richard Corlett’s, Skiddaw View Farm, Cockermouth, clearing 20 acres of meadowland that had been smothered with 30,000t of silt and gravel up to three feet deep. In addition to the £15,000 cost of removing the gravel it will cost a further £5000 for cultivations and re-seeding.

“It’s been a huge job but we need to get this land back into production. On farms where the flooding caused such large-scale damage the £6800 maximum payment is no where near enough to cover the clear-up costs,” said Mr Corlett.

The Environment Agency‘s manager for north Cumbria, John Shatwell, has joined the call for more money to help farmers hit by the floods.

“The floods aren’t in the headlines any more but there are many farmers who desperately need more then the £6800 to restore land covered in debris. We’ve made a case to DEFRA and are expecting a response,” said Mr Shatwell.

But the EA has also come in for criticism from some farmers who say the organisation has refused to re-direct watercourses after flooding caused them to establish new routes across farmland.

“We appreciate farmers’ concerns about future flood risks from new watercourses but there are steps that can be taken to make the banks more stable. We’d be happy to discuss any well thought-out ideas that farmers may have such as tree planting along new banks to improve stability,” said Mr Shatwell.

Andrew Nicholson who farms at Swinside End Farm said the EA were still underestimating the risks of further flooding. “On our farm there are stretches where the river has gone much wider and there’s no banking. Another day like we had last November and the damage would be 10 times worse than we had before.”

Mr Nicholson described many of his lowland fields hit by the floods as a “death trap” for ewes and lambs.

“Like a lot of others we’re not only facing the cost of clearing up and re-fencing these fields but we’re going to have to rent extra land once lambing starts. We’ve had to house ewes earlier and are fast running out of winter feed.”