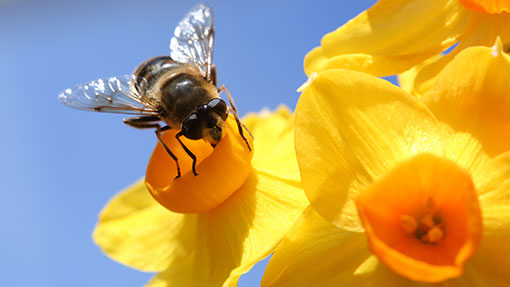 Pesticide spraying during the daytime is being banned in France to protect bees, according to reports.

French agriculture minister Stéphane Le Foll has decided to ban farmers from spraying during daylight hours between March and October.

The agriculture ministry is drafting the details of the ban in a document to be published soon in its official journal. The order will likely come into force in three to four months’ time with no exceptions.

Currently, French farmers are banned from spraying certain chemicals in the morning, but many obtain derogations.

Mr Le Foll told Le Figaro newspaper he had decided to ban spraying during the daytime after analysing research by the French Agency for Food, Environmental and Occupational Health and Safety (ANSES).

A study by ANSES found that honey bees are sensitive to light, which means they come out more in the daytime.

Meanwhile, traces of pesticide left on plants and on early morning dew may disturb bees during flowering periods of spring and summer, ANSES said.

Therefore spraying pesticides during the evenings when they have stopped gathering nectar could help reduce the decline in their numbers, Mr Le Foll believes.

“Light is what makes the bees come out and all spraying in the morning has important consequences,” the minister told Le Figaro.

Mr Le Foll said the ban was intended to protect “agricultural production and at the same time to protect pollination and honey protection.”

According to ANSES, 13% of bee colonies were destroyed from April to September 2013 in France.

Nick von Westenholz, chief executive officer of the Crop Protection Association, said he did not believe there was a need for a similar approach in the UK.

He added: “We are fortunate in the UK to have highly skilled sprayer operators undertaking continuing professional development (CPD) under the National Register of Sprayer Operators (NRoSO).

“This means UK operators take a great deal of care and have due regard for pollinators and other wildlife when spraying.

“For instance Voluntary Initiative guidelines advise operators to notify local beekeepers if flowering crops are to be treated and spray in early morning or late evening when bees are not working.”

Mr von Westenholz also questioned the logic of a mandatory reduction in the daylight hours available for operators to work, at a time when farm safety was very much in the spotlight.