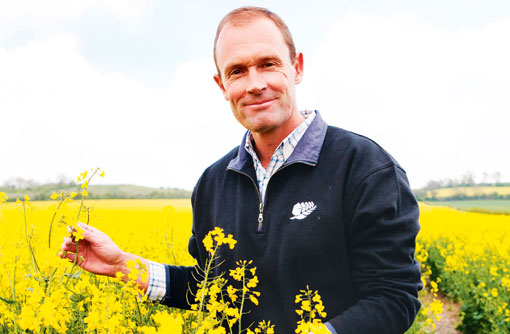 The week of the Cereals event was even more interesting than usual this year.

On Monday morning I had just scraped together half a dozen coffee mugs in preparation for a visit from a group of French farmers, only to step out of the office and find 50 of them looking at me expectantly. They then asked in all seriousness if I was going to address them in French.

I wish I was able to as I could probably learn a lot from this group, who are all involved in “conservation tillage”. A show of hands indicated half of them were sowing their oilseed rape with pulse companion crops. I will be experimenting with this a little this autumn. They also provided me with some wine and a year’s worth of their publication “Techniques Culturales Simplifiées”. I’ve translated the title already.

The Tuesday was spent judging oilseed rape, which I always find extremely interesting, if not a little random. This year, however, the crops were soaked by several days of rain that continued overhead and, with the rules stating we had to get in off the headlands, I have to admit by the 15th field my enthusiasm was a little dampened, not to mention other parts.

Thankfully, I had dried out by Cereals, and having thought in previous years that one day was not enough, I stayed for two, only to wonder whether I couldn’t do with three really. Highlights included finding companies who will make me a liquid fertiliser placement system to fit on my no-till drill and securing a trial area of the wheat variety Weaver in my never-ending quest for the UK’s perfect variety. I was also informed the site was moving next year. “Further south?” I enquired hopefully. “No, 80m to the east” came the reply.

Andy Barr farms 630ha on a mixed family farm in mid-Kent, including 430ha mainly of winter wheat, oilseed rape and spring barley. The rest is taken up by an OELS scheme and grazing for 500 Romney ewes and 40 Sussex cattle.