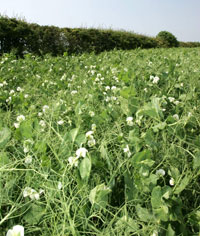 French pea and bean producers are set to receive up to €150/ha (£139/ha) in additional support, giving them a huge potential advantage in the international market.

The scheme put forward by the French government for next year’s crop is being introduced under the Article 68 provision of the CAP “health check”, which allows member states to re-target single farm payment money at certain groups of farmers.

The French claim that the payments, which are on top of the existing €56/ha (£51/ha) protein crop aids, are justified on the grounds that growing such crops protect and enhance the environment.

But NFU president Peter Kendall has written to EU Commission head of agriculture, Jean-Luc Demarty, to express his “strongest reservations” about the decision, which is also being replicated in parts of Germany.

“Not only does the proposed aid fly completely in the face of the commission’s intentions to encourage producers to respond to market signals, but is likely to amount to a significant distortion of competition within the single market.”

The letter goes on to explain that the extra aid will lead to a trebling of the pea and bean crop area in France, and could give French growers “a massive competitive advantage” in key third country markets such as Egypt.

“The level of support would allow French producers to undercut UK product by at least £30/t,” said Mr Kendall. “A number of pea and bean growers in the UK are already questioning whether, faced with such competition, it is worth planting proteins for harvest next season.”

The NFU does not believe the French claims about environmental benefits from growing protein crops properly meet the conditions for such coupled payments set out in Article 68.

Under the CAP health check, the separate €56/ha coupled support for protein crops is due to be abolished in 2012, with the funds likely to be absorbed in general SFP payments.

* For a FW comment on this story, see Phil Clarke’s Business Blog