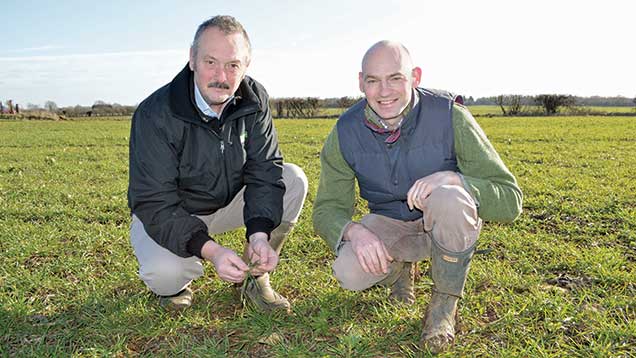 Early wheat fungicide sprays are becoming more important to keep on top of diseases as the effectiveness of a key group of pesticides declines.

The sharp loss in efficacy of the azole fungicides means the focus is shifting to bolster early disease control as delayed treatments are not often an option.

Experts suggest the spending split between the two main fungicide timings of T1 and T2 should be 50:50 rather than the usual 40:60.

This shift to early-season spending comes as the azoles lose their curative activity and so are inable to rescue a bad disease situation later in the season and act as a get-out-of jail-free card.

Agronomist Paul Gruber with distributor ProCam believes the battle against the key wheat diseases septoria and yellow rust needs to start early in the season.

“Because of the decline of the azoles, we cannot fight diseases as well, so we need to spend more early in the season to protect crops,” he tells Farmers Weekly.

He sees disease pressure in his area of north Oxfordshire is on a par with last spring, with plenty of septoria and yellow rust around after a relatively mild winter.

Wheat growers simply cannot allow disease to get established because azoles won’t be able to come the rescue later in the season, Mr Gruber stresses.

SDHIs (often in mixtures with azoles)

“We have to do more early to prevent a massive reservoir of inoculum infecting the flag leaf. We can’t rescue the situation at T2 anymore,” he says.

This is leading to questions about the conventional wisdom that the T2 flag-leaf spray is more important than the earlier T1 spray.

Iain Hamilton, field technical manager at agrochemical group Syngenta, is looking at the subject at the company’s innovation centre at Grove Farm, Weston on the Green, some three miles south-west of Bicester.

Mr Hamilton points out that the curative action of azoles such as epoxiconazole and prothioconaozle are at best 30%, down from 90% some 15 years ago.

Getting the timing of the T1 spray correct can be tricky and should be related to leaf emergence rather than simply growth stages, he adds.

The T1 timing often coincide with GS32, when the first and second nodes are at least 2cm apart on the main stem, but it is better to link T1 to when leaf three is almost fully emerged.

“Early-drilled crops are more advanced in terms of nodes, so growers need to focus on the emergence of leaf three,” he says.

Mr Gruber suggests a benchmark for the T1 spray, usually applied in late April/early May, should be a three-way mix of different fungicides.

This would include an azole, one of the newer SDHI fungicides and a protectant product such as chlorothalonil.

“First, the three-way mix gives the highest yield, and second it will help as part of an anti-resistance strategy,” he says.

Resistance strategies took on greater importance after the strobilurin group of fungicides broke down against septoria in the late 1990s, leaving only azoles and SDHIs as systemic fungicides to control the wet weather-loving disease.

So the focus of attention is now to try to reduce resistance building up and using good rate of azoles to help protect the viability of the SDHIs.

“We need the three-way mix to avoid getting into the strobilurin situation as we can’t afford to lose the SDHIs,” he says.

His approach is to use a T0 spray in late March/early April to help dampen down overwintered inoculums, typically using an azole mix of tebuconazole and prochloraz along with chlorothalonil.

“The T0 spray used to be an insurance, but now it has become essential,” he says.

His T2 flag leaf spray advice in late May would be a similar three-way mix used for T1, with perhaps a strobilurin added to add some rust persistence and for its physiological effect on growth.

But as Mr Gruber points out from his group’s trials, every £1/ha spent on fungicides gives a £3/ha reward in terms of extra grain yield.

Mr Gruber and Mr Hamilton agree it is essential to keep spray intervals at two to three weeks and four weeks at the very outside.

Catch up on all the latest advice on disease control in winter wheat ahead of the fungicide spraying season. Read our academy on fungicide management.