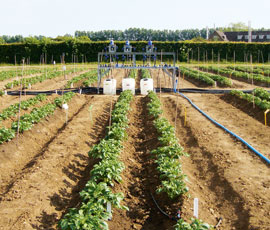 Research on irrigating strawberries with less water could translate to spuds.

As drought threatens to curtail irrigation in many parts of the country, research in Kent – originally on strawberries – suggests more potato growers could usefully reassess drip methods.

“On many soils irrigation is essential to produce high yields of good quality tubers. But after the driest 10 months for nearly a century, the availability of water for irrigating crops in 2012 is an increasing concern for many growers.

“If they are to maintain or increase yields against the backdrop of rising summer temperatures, dwindling water supplies, and government demands for greater environmental protection, new best practice methods to make better use of water and nutrients are needed.”

In theory drip irrigation is the most efficient way to apply water and help control scab, says Dr Else. “But in practice the results have been mixed and the systems perceived as costly and perhaps impractical.

“Its success often depends on the irrigation manager’s dedication in making it work, and drip is not suitable for all soil types – for example, it’s not appropriate for sandy, free-draining soils where lateral water spread is limited.

“So the investment needed to install and maintain a drip irrigation system is currently perceived by many growers as economically unviable. But this perception may change given increasing pressure to reduce water abstractions and produce crops in environmentally sustainable ways.”

A Cranfield University DEFRA-funded study is under way to clarify the true economics of different irrigation systems, he adds. “It’s exactly what we need.”

“We’ve shown that there is scope to improve on current scheduling tools by combining detailed monitoring of plant physiology with more sensitive techniques for measuring the soil matric potential (SMP) at critical points in the rooting zone.

Unlike other probe techniques, the SMP method reveals how hard the plant has to “suck” to remove water from the soil, he explains.

“We’ve identified the values at which leaf growth and photosynthesis start to be affected and used them to derive upper and lower irrigation set points between which yields and quality are optimised.

“The real benefit of measuring SMP is that the critical values at which important agronomic and physiological traits begin to be affected will be similar in very different soil types.”

In commercial strawberry trials drip irrigation based on measuring SMP has cut water and fertiliser use by 36% and 21%, respectively, while increasing yields of class 1 fruit by 18%, he notes.

“I believe there is great scope for this technology to be transferred to the potato sector, but new guidelines will clearly be needed to cater for both overhead and drip irrigation systems.”

In field trials using SMP-driven drip irrigation on Maris Piper in 2009, yields of 68-78t/ha of marketable tubers were achieved using between 45 and 61% less water than typically applied by growers through conventional overhead irrigation, he notes.

Applying half the fertiliser via the irrigation (fertigation) appeared to boost yields – by about 4t/ha – although that was not statistically significant, he admits.

“An important finding was that drip irrigation had no significant detrimental effect on the tuber’s dry matter, sugar content, organic acid profiles or storage potential.

“In 2010, we were able to reduce recommended fertiliser inputs by 20% using a combination of traditional base fertiliser applications and fertigation without affecting grade 1 tuber yields or quality.

“Our results suggest that effective scheduling of drip irrigation using scientifically-derived guidelines could reduce seasonal water use in the potato industry by 30-40%.

“Combining fertigation with base applications should also lower fertiliser requirements by enabling nutrients to be targeted more precisely at critical stages of plant and tuber development.

“We now need commercial field trials to deliver this science into practice; and more research is needed to identify irrigation set points for other varieties so that regimes can be more specifically tailored, especially for those more tolerant of drought stress.

“We also need to identify the critical SMPs which increase the risk of common scab infection in specific varieties. That should help make irrigation scheduling for control more precise.”