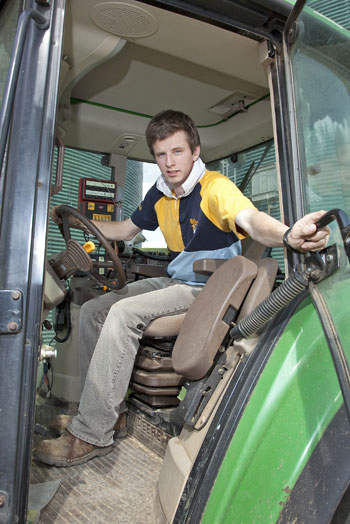 After passing my BASIS exam, I’m now attempting to learn all about fertilisers, nutrients and NVZs for FACTS. But I shall refrain from commenting about having to learn the imperial conversions, as ordering a 568ml next time I’m in the pub just doesn’t sound right.

The oilseed rape should now be a vast sea of yellow flowers – or, if the weather forecasters were right, looking sorry for itself in the snow. It has now received all its nitrogen, and was the first ‘trial run’ for us using liquid fertiliser – which will be used for the whole farm next season to help improve placement accuracy.

The wheat has had the second nitrogen application, but we are holding back about 50kg/ha of N in the hope of some rain later in April. It is still an untidy mix of plant sizes and tiller numbers but is slowly evening out.

A recent trip to friends in Cheshire highlighted just how little rain we’ve had as a country. I normally consider it to be reasonably wet up there, but although his wheat and grassland all looked considerably better than ours, it was still almost a dust bowl on any cultivated land. I’ve heard talk that we need twice the annual summer rainfall to return to normal ground water levels – is it just me or does that sound like a recipe for harvest disaster?

Luckily, the fuel-buying panic seems to have died down now, considering no strike had been announced it seemed a bit mad to me. It just shows how much the country relies on fuel; maybe a similar scare for food wouldn’t be a bad idea to get people thinking properly.