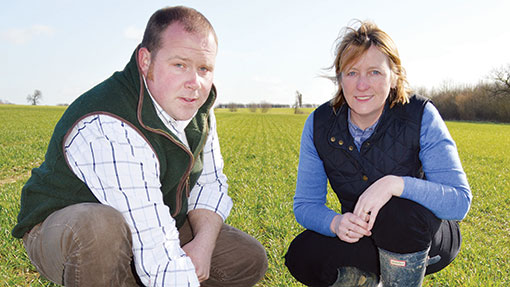 The mild winter could herald a high-disease year for cereal growers, so one Essex wheat grower is prepared to spend to protect his yield potential. David Jones reports.

Ian Gibson may have to raise his fungicide spend by up to a third this season to fulfil the potential of his forward-looking wheat crops.

His winter wheat has grown well through a mild winter and so has the crop’s number one yield-cutting disease, septoria, on the lower leaves.

Signs of septoria were seen in the autumn on the Essex farm he manages along with some mildew and he expects that rust, as yet unseen, could move into his susceptible varieties.

With the wheat looking very well, the extra investment on fungicide is likely to be justified and he is determined to keep on top of disease from early in the season.

“The yield potential is there in the crops so to spend a little bit more would not be a wrong decision,” he says.

Last year’s fungicide bill in a low-disease season was about £90/ha, but this year the spend could well be £120-125/ha to keep his impressive-looking wheat clean.

The likely higher cost this year is due to increased disease pressure as a result of the mild winter which resulted in reduced or even no disease kill, adds Mr Gibson.

The warning signs came when the early-drilled wheat variety Scout showed “very virulent” levels of septoria late last year so this disease will be vital to control in his early fungicide treatments.

He has decided on a triazole-chlorothalonil approach for his first T0 spray, which is aimed for the last 10 days in March to begin control of septoria and rusts.

The chlorothalonil is used to protect new growth from septoria, while the triazole helps to control septoria on the lower leaves and gives rust control and protection for susceptible varieties.

Any mildew will be controlled at the later T1 timing with a mildewicide, such as proquinazid (Talius).

Despite the declining effectiveness of the triazoles against septoria, he sees epoxiconazole and prothioconazole as two of the most effective with the former having the slight edge.

He considers epoxiconazole is a touch better of the two on yellow rust which he expects could move into his susceptible variety Gallant, while he aims to rotate triazoles to aid resistance management.

The other triazole, prothioconazole, is likely to have a key place later in the season to control diseases such as fusarium at the T3 June fungicide timing, he adds. 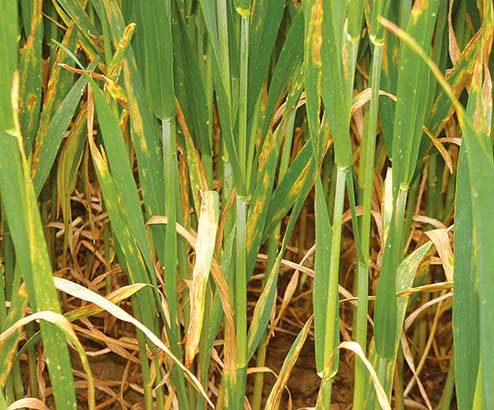 The chosen formula for his T0 fungicide spray on the Scout winter wheat is 0.5l/ha of epoxiconazole and 1l/ha of the multi-site protectant fungicide chlorothalonil, a combination which he says will give good value for money.

“Gone are the days of using low dose rates in a high disease year, we now need to use robust rates. It’s about being pro-active and keeping disease out of the crop,” he says.

Low dose rates at T0 would be fine in a “normal” year, but increased rates are needed with well-established thick crops when there is a high disease pressure, Mr Gibson adds.

He manages 510ha of all arable cropping at Radbourne Farms, owned by Simon Radbourne, across largely medium clay loam soils, based near Aythorpe Roding, some five miles south of Great Dunmow.

The six-year rotation is two winter wheats, oilseed rape then another two wheats followed by spring beans, with his 330ha of wheat divided between breadmaking, biscuit and feed varieties.

Varietal choice is a vital tool in Mr Gibson’s resistance management before looking at agrichemical alternatives, and a great deal of time is spent looking at varietal characteristics and fungicide yield response curves to formulate the most effective disease control strategy.

His biscuit wheat Scout is grown as a first wheat, with milling variety Gallant as a second, while feed wheat Alchemy, Myriad and Relay make up the rest of his cropping. First wheat have given average yields about 9.2t/ha and second wheats some 8.2t/ha.

As soon as his T0 fungicide is applied on the wheat, he will be counting the days and hoping the gap between his next T1 spray will not be more than four weeks.

“The idea of the T0 is to protect the emerging new leaf, and thus prevent disease from spreading to the yield building leaves, leaf 3 and then ultimately the flag leaf,” he says.

He regards the T0 timing as the place to get a protectant spray on his crops and also start off his anti-resistance strategy by mixing products with different modes of action.

He is planning an SDHI-triazole approach on his Scout and Gallant using Seguris at T1 with extra epoxiconazole set to be added if rust is prevalent on the Gallant, and again adding in chlorothalonil.

“We feel this is a very good combination for septoria control at T1 and has worked very well for us in the past,” he says.

One of his agronomists Christina Lankford with distributor ProCam helps Mr Gibson set out his fungicide strategy for the Gallant and Scout with septoria very much at the fore and early control seen essential.

“This is the season to get your T0 and T1 sprays right because of the early disease pressure,” she says.

The use of Seguris at T1 will allow a rotation of SDHIs later in the season and the plan is to use another SDHI-triazole product Adexar at the T2 May flag leaf timing, with a strobilurin added if extra rust control is necessary.

“SDHIs work better when applied to crops which are as clean as possible of disease,” she says.

Last season, when the average fungicide spend was £90/ha a later-drilled Scout crop came in at £87/ha and a yellow-rust susceptible Oakley at £107/ha. This season the Oakley was replaced with Relay due to its greater disease resistance profile.

Although this season’s wheat crop looks well-established and set up for a high yield, the lack of any meaningful frost means that disease control will be vital.

“Septoria will be key at T0, it is on the lower leaves and not the upper leaves and that is the way we would like it to stay,” Mr Gibson says.

The need to keep on top of septoria in the early spring is vital as the biggest factor in the disease’s spread is heavy rainfall in April and May.

If the season does turns out to be dry, then the early disease control will allow Mr Gibson the chance to cut back on fungicides later on.

“If we start with a robust T0 then we will not be chasing disease through the season and will give us the option of reducing rates later,” he adds.

What the experts say on septoria

The HGCA says Septoria tritici is the most important wheat disease in the UK, and has reduced yields by 20% in its untreated fungicide trials.

It advises that a fungicide programme needs to start in the spring to limit disease on the lower leaves, but says the GS39 flag leaf timing is the most important to keep upper leaves disease free in order to optimise yield and quality.

Triazole and SDHI fungicides are the primary methods of control, while anti-resistance strategies will help to preserve and extend these fungicides’ useful life. These include rotating and mixing different triazoles, SDHIs and also multi-site protectant products.

Many older triazoles have shown a decline in efficacy and now offer very poor control of septoria, and in practice triazoles usage in the UK is largely focused on a few where good efficacy against septoria is retained, such as epoxiconazole and prothioconazole.

SDHIs are considered to have a medium to high-risk of resistance development because of their single site of action and so the HGCA advises they should only be used in mixtures with fungicides with a different mode of action.