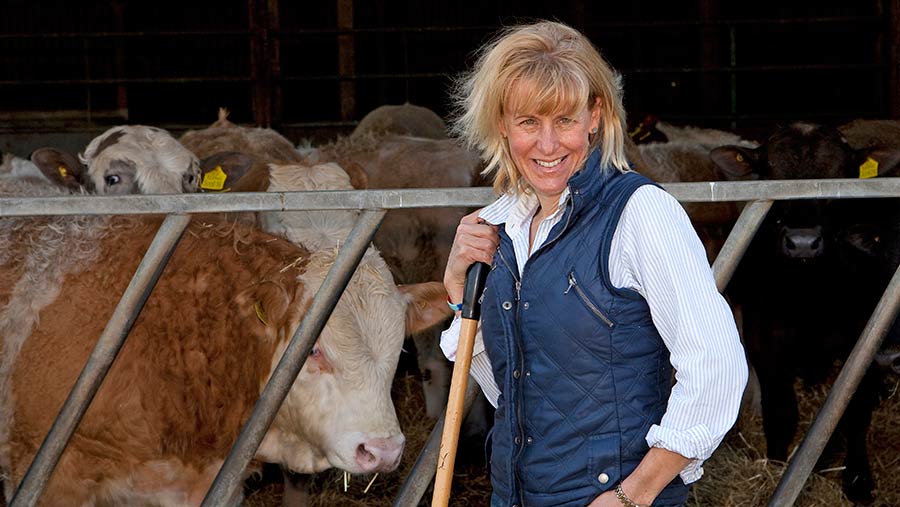 Minette Batters wants a transition period of five to 10 years to hammer out a new domestic farm policy and avoid Britain falling off a “cliff edge” when it leaves the EU.

With the details of any future EU trade arrangements and industry regulations unlikely to be clear for at least two years, the NFU deputy president argues farmers need time to adapt to life outside the control of Brussels.

Full terms of Britain’s EU exit process will only be known at the earliest by 2019, just before the government’s freeze on farm subsidy levels thaws in 2020, so this gives farmers little time to react to any changes to subsidies on which the livelihood of many depend.

“A period of transition is very important as we step off the EU platform and on to the UK platform and not fall off,” she tells Farmers Weekly.

While some farmers are calling for an end to direct subsidies within a short time frame, Ms Batters admits the industry is not in broad agreement on this issue, but insists policymakers need to avoid decisions which will be life-changing for some.

Read the rest of the series

Prime minister Theresa May has already said she wants to avoid a “cliff edge” when Britain leaves the EU saying people require some certainty on the EU exit process.

The current farm support system costs £3.2bn/year, or as Ms Batters puts it some 23p/day for the average citizen, which she says is good value for money given the benefits it gives such as a sustainable agriculture, a safe supply chain and a strong rural economy.

In the global league table of subsidies for agriculture Britain is just a mid-table player, way behind the high subsidies enjoyed by many, such as Norwegian farmers.

But farmers will have a big task arguing for continued money for farming given the near inexhaustible annual needs of the NHS at £116bn and rising.

“We will have to roll our sleeves up to make a case for the same money for farming,” she says.

Britain has very high standards of animal welfare and environmental protection, so she warns about importing food produced to different standards such as using growth hormones and pesticides unavailable to British farmers.

Back on her Wiltshire farm she is already focused on cutting costs on her beef, sheep and arable business, and is trying to get her enterprise into as good a shape as possible before any changes are made to farm support.

The largest enterprise of her 120ha farm near the village of Downton close to the Hampshire border is a 100-strong suckler herd, and she admits the red meat farming industry has long been reliant on financial support.

With 38% of British sheepmeat heading to the EU, she points out without any trade deal, British exports could be facing the 51% tariff faced by non-EU sheepmeat-producing countries.

She has diversified away from mainstream farming into a horse-livery business and has created a wedding venue in a 17th century barn overlooking the water meadows of the River Avon, just south of Salisbury.

The British government has indicated it will look to move farming away from the notion of subsidies based solely on land ownership towards rewarding farmers for looking after the environment in terms of sustainability, protecting watercourses and encouraging wildlife.

Defra minister George Eustice has pledged to hold subsidies at current levels until 2020, but urged farmers to move away from the notion of subsidies and favours ideas such as capital grants, crop insurance schemes and financial tools.

Linking subsidies to the amount of land owned came in for heavy criticism last September when it emerged that 10 of the largest farming organisations in Britain received more than £1m each from the EU’s CAP.

Two-thirds of the £3.2bn total farm support is paid directly to farmers through the Basic Payment Scheme and the rest is tied into complying with environmental schemes.

Ms Batters argues this two-tier system needs to be swept away and replaced by a “whole-farm” approach based on a foundation payment with “building block” additions such as for environmental work and capital investments.

“We have to encourage businesses to invest to become to more efficient and effective, so after 40 years of living in the EU, the farming world has to adapt,” she says.

She believe British farmers have climate on their side, but is very mindful of the limitation of climate with the wetter West largely being limited to growing grass and rearing livestock.

“There are great challenges ahead and also great opportunities and we are excited as we look to create a new plan for the future,” she adds.

In 2015, direct farm subsidy paid to UK farmers in terms of the Basic Payment Scheme amounted to £2.3bn, while the total support under the CAP came to £3.2bn.

This includes additions such as  Countryside Stewardship schemes and woodland grants. For 2016, the basic payment scheme was £212.69/ha for lowland England.

In the next instalment we talk to a leading group of farm consultants which argues arable farmers will have to drive down their fixed costs in terms of machinery and labour to be competitive in a world of lower subsidies.