The number of farmers’ markets has increased dramatically since the first was opened in the Somerset town of Bath 12 years ago. There are now 750 farmers’ markets across the UK, generating about £250m for the economy. When you include the 4000 farm shops, plus various pick-your-own and box schemes across the UK, the retail value of the direct-sale farm produce sector is estimated at £2.5bn.

The biggest growth in new farmers’ markets and farm shops was during 1997 to 2001 and then, after the foot-and-mouth outbreak, there were another six years of expansion. The recession has put the brakes on new start-ups, but strong underlying demand for local food and increasing government backing means there is a bright future, says Rita Exner from the National Farmers’ Retail & Markets Association.

“A YouGov survey published in June suggests over 50% of people now buy local foods from farm-direct outlets and 90% of people would like to shop locally if they could,” she says.

“Most markets are reporting that visitor numbers are much the same as before the recession, even though the amount they’re spending has fallen slightly – it can be anywhere between £5-£100, depending on what they’re buying. People still want to buy local food and the recession has also made them more aware of how important it is to support local businesses.”

Such claims appear to be gaining more support in government, too. Climate change, the “commodity boom” in 2007-08 and resulting food security fears have sparked a spate of policy documents relating to local and sustainable food.

For farmers’ markets, one of the most significant came on 12 October when the government stated its intention to support street, covered and farmers’ markets with the establishment of a new working group, Ms Exner says. 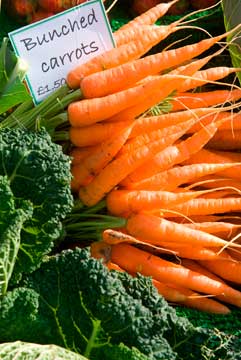 The group includes officials from a range of government departments, the Food Standards Agency and various market organisations. For the first time, it gives farmers’ markets a forum and voice across government, with the working group reporting to local government minister Rosie Winterton and Minister for Food Jim Fitzpatrick.

A parliamentary report published in the summer also backs farmers’ markets, highlighting their role in supporting the local community and rural economy. “They are often used to showcase local and regional produce and can inject money into rural economies and help boost the development of small businesses,” it says.

In addition, local food is featuring more in food security discussions, where policy makers are keen to ensure the growing population is fed in an economic and environmentally sustainable way.

The first report from DEFRA‘s new independent Council of Food Policy Advisors, produced last month, calls for food to be given a higher profile in the climate change debate. It acknowledges there is increasing interest among consumers in the ethical provenance of their food, including impacts on biodiversity, water quality, animal welfare and fair trade.

The Archbishop of Canterbury, Rowan Williams, publicly added his weight to the argument a fortnight ago when he called for “unsustainable” air-freighted food to be replaced by home-grown produce.

In an interview with The Times he said families needed to respond to the threat of climate change by changing their shopping habits and adjusting their diets to the seasons, eating fruit and vegetables that could be grown in Britain.

But despite this support, it is action and a change in consumer behaviour that is needed. The recession has dented shopper spending and prompted aggressive discounting by supermarkets, making it increasingly difficult for farmers’ markets to compete on price alone.

“Farmers’ markets are competitively priced for seasonal produce compared with supermarkets, but what they don’t do is go down to the silly discount levels supermarkets do,” Ms Exner says.

FARMA’s Gareth Jones adds: “Their success is fragile, built on the enthusiasm and hard work of their organisers, sometimes in the face of unhelpful local authorities.

“If local authorities can be persuaded to put in infrastructure for markets and farmers’ markets and embrace them as a vital part of the community, life in our towns and villages will be the richer for it.”

Planning permission is one of the key hurdles many markets have to overcome, particularly those looking to expand and increase their frequency, says Ms Exner.

A large proportion of existing farmers’ markets operate monthly and, as a result, are classed as temporary events, exempt from the planning permission requirements. However, if farmers’ markets are to draw more shoppers away from bigger retailers, they need to increase their frequency. This puts pressure on workloads and means they will be subject to tighter planning controls, she says.

The government is addressing the planning issue and, in May this year, published a draft planning policy statement: Planning for Prosperous Economies (PPS4). It aims is to create a new set of policies for urban and rural areas and maintains a strong policy approach to markets.

Government is analysing the responses and plans to publish the final PPS before the end of the year.

A slice of UK food history