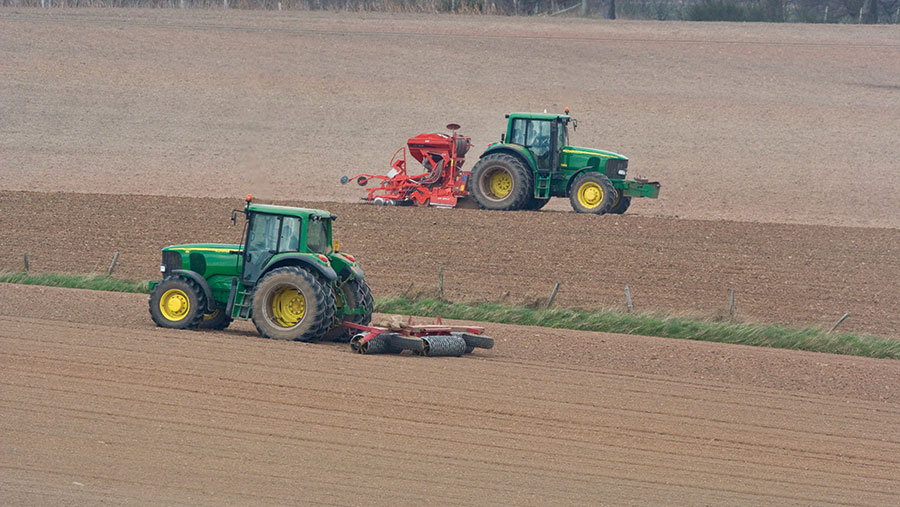 Take control of your machinery costs, as it’s the area where most can be done to make savings, according to the AHDB’s Monitor Farm initiative.

“The range is around £160/ha to £320/ha, so growers should be under no illusions about the importance of them in the current economic climate.”

His concern was that there’s been a rising trend in machinery costs. “We’ve seen depreciation increase by over £25/ha over the last five years, which has more than cancelled out the fact that fuel costs have fallen in that time.”

Speaking at recent eastern region Monitor Farm meetings, he suggested using a technique known as proportional analysis, which allows each cost category to be looked at as a proportion of turnover, as a good starting point.

“It’s a rough and ready guide, but it is useful. Variable costs, for example, should be 30% of turnover. Worryingly, they’re around 45% on many farms at the moment.”

The proportional analysis targets for labour and power costs are 17% each, or a combined total of 34%, he revealed.

Having established what this figure is, growers can then undertake a more detailed machinery analysis, looking at machinery utilisation, work rates and replacement policy, to get a clearer picture of their individual farm situation and to see if changes can be made.

“Start by carrying out a horsepower per hectare calculation,” he recommended. “It will help to tell you whether you have got enough, too little or too much kit.”

To do this, add up the horsepower of all of your machinery, except the combine, to get a total figure, before dividing it by the arable area.

“Include tractors, sprayers and forklifts. Any hired machines should be included by dividing their horsepower by 52, and then multiplying by the number of weeks they are on the farm.”

The horsepower per hectare target for an arable farm is 0.8-1.0hp/ha, he revealed. “In the current economic climate, this is likely to go up a bit. That’s because growers are more likely to repair rather than replace their kit while capital expenditure is on hold,” said Mr Gwatkin.

There are a number of ways to reduce this hp/ha figure, including increasing your arable area, reducing your number of machines, replacing owned machines with hired ones, sharing machinery with neighbours, establishing a joint venture business or using contractors, he noted.

Work rates can be calculated and compared by using time sheets to record all hours worked, including the time spent on breaks, any other downtime and travelling to and from the field. “They will vary with the area and the crop, but you can then compare them with previous years and with others, to see how you are doing.”

A machinery replacement policy helps with planning and managing depreciation costs, he continued.

“Use a spreadsheet to list out your machines by category, with an opening value, and set out which machines you will replace and when you will do it. That will work out your depreciation.”

Do you know what your farm’s operational costs are? Should they be considered in the same way as your variable costs? And how do they differ from your structural costs?

These were just some of the questions posed by John Pelham of Andersons Midlands at a recent meeting of Adama’s thought leadership group, in a session designed to get growers thinking about business profitability.

“Splitting out your costs into two categories, operational and structural, is a different way of allocating them to the traditional fixed and variable-cost system,”

“It’s an approach which reflects the nature of our current subsidy system, which doesn’t require farmers to produce crops in order to be entitled to their payment.”

Operational costs are those which are only incurred if farming takes place and crops are grown, he explained.

“They include the traditional variable costs, such as seeds, fertiliser and sprays, but they also bring in other areas such as the cost of men and machines for arable operations, plus related activities such as grain drying.”

In contrast, structural costs are those that remain in place whether crops are grown or not, he continued.

“The main ones are rent and finance, plus administration charges. There will also be items such as buildings maintenance and some insurance included in these.”

This method of analysing expenditure wouldn’t have been appropriate prior to 2005, he pointed out. “It’s only since January 2005 that we haven’t been obliged to produce anything in order to be entitled to subsidy. Up until then, subsidy was linked to output, so was part of a gross margin calculation.”

This means that any farming business can work out its pre-farming profit, he added. “You simply take the subsidy amount and subtract the structural costs. The remaining, or operational, costs are all linked to farming activity.”

While Mr Pelham accepts that an operational and structural costs approach is a different way of interpreting the same facts and figures, he believes it is very helpful when it comes to investigating overhead costs.

“Understanding overheads is very important. They’re not as fixed as growers think they are and they can represent 60-70% of all costs.”

So what are typical operational costs for an arable business? Mr Pelham noted that there was quite a range, with some of the larger farms finding it difficult to keep a lid on them.

He illustrated this point with two examples. The first, a small 200ha tenant farm paying a rent of £149/ha and sharing machinery with a neighbour was achieving average yields of 9t/ha.

The second, an arable business covering 2,500ha on 12 different sites, was recording yields of 12t/ha and going all out for high technical performance.  But a big machinery bill and securing some better land on a farm business tenancy at £619/ha meant that it had operational costs of £1,650/ha or £138/t.

“Taking a wheat price of £120/t, the first business is making a profit of £23/t. The second is losing £18/t, despite its higher yield performance,” he said.

“The average number of combining days per year is 20, and average drum hours are 200/year.”

Deciding to change your current system will depend on the value you put on timeliness, as well as the amount of ground it has to cover and the harvest workload, he accepted.

“If you’re making a significant investment into owned machines, look at the possibilities of a buy-back contract,” he suggested. “It helps to manage risk.”