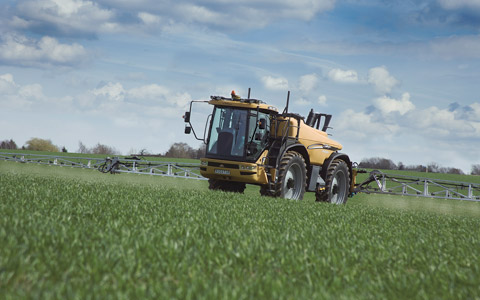 Most oilseed rape crops are at a greater risk of lodging this year, although predicting when it will start and how severe it will be is difficult, according to a recent review conducted by ADAS on behalf of BASF.

“By and large, oilseed rape got away well and just kept on going,” she reports. “We haven’t had enough cold weather to knock these forward crops back. Some even have a Green Area Index (GAI) approaching 3.0 already.”

Past work has shown crops with a GAI in excess of 1.5 at this stage of the season are more prone to lodging, she reports. “The other problem with large canopies is that crops are likely to overshoot the optimum canopy size of 3.5 by mid-flowering, which has implications for yield.”

While large canopies can be tackled by fine-tuning nitrogen applications and using an appropriate growth regulating fungicide, preventing lodging requires very close attention to PGR timing, as the crop must be visibly growing, she says.

“We know applications in March tend to shorten the crop and reduce lodging risk the most. So waiting until April may not be a good idea this year, unless it is too cold or dry for growth. Remember that we haven’t had a bad lodging year for a while, so this season could be a real test.”

As a result, she recommends that growers assess GAI twice, so that nitrogen requirements and lodging risk are dealt with separately.

“Do your first inspection in February for your nitrogen calculations. But wait until March before you assess the GAI for PGR use. Only if it’s below 0.8 at that stage should you have a re-think on PGR use.”

“We found that lodging results in a yield reduction of between 16-50%,” says Dr Clarke. “That’s caused by a restriction in the supply of assimilates, poor seed fill and pod shatter.”

This can be explained by the fact that lodging compresses the canopy layer, which reduces light penetration and use, she says. “If it occurs at flowering, it reduces seed set and weight, as well as reducing pollen flow and affecting pod synchrony.”

Lodging at early pod fill is the most damaging in terms of yield, with losses as high as 52%, she adds.

However, the amount of yield loss from lodging depends on two key criteria; the start time and the severity. The ADAS/BASF review found further information is still needed if either of these factors is to be predicted with any accuracy.

“We know that weather at the time, such as a heavy storm, can have an influence, but beyond that there’s uncertainty.”

The use of a growth-regulating fungicide, such as metconazole, is highly applicable to this spring, she believes. “Research shows that if you can reduce the height of the crop by 10cm you can increase yield by up to 0.32t/ha. There’s a strong link between height reduction and lodging – each 5cm reduction in height brings lodging down by 10%.”

The greatest height reduction comes from mid-stem extension applications, or the late green bud stage, she says. “If you get past the yellow bud stage and into flowering, then you should expect to see a lesser effect on height.”

The work was done with full rate applications and Dr Clarke points out that using half rates will have half the effect. “And there are alternatives to metconazole; tebuconazole will have similar effects.”

She warns against trying to combine the growth regulating application with disease control. “It won’t be quite right for sclerotinia and will end up as a compromise.”

Clare Tucker, BASF’s agronomy manager, agrees GAI should be measured at the flower buds visible stage, just at the point of stem extension. “That will be about three weeks after the nitrogen assessment, when the crop has started to grow and you’ve had 7-10 days of good growth.”

In a normal spring, waiting until April might be a bit late, she warns. “The earlier you go, the greater the height reduction. As we have some big crops out there, applying 0.8 litres/ha of Sunorg Pro will be justified.”