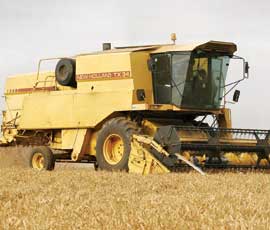 After a late spring and a tricky growing season, more combine pea growers may be thinking about a desiccant spray to even up crops ahead of harvest. David Jones reports

With the combining pea harvest set to start, growers are being urged to avoid going in too early with a desiccation spray as it can cut yields.

In a season when pre-emergence herbicides may not have worked well and a dry spell was followed by heavy rain, desiccant sprays may be more popular to control weeds and deal with uneven crops.

Those growers who decide to use pre-harvest desiccation sprays are being urged by the Processors & Growers Research Organisation (PGRO) to get the application timing spot on.

“There are a few more crops this year that look a bit uneven, so maybe a few more desiccant sprays will be used,” says Jim Scrimshaw, principal technical officer at the PGRO.

If growers spray too early then the pea haulm can collapse, as insufficient lignification will have taken place, and the crop will lodge and hence yields suffer.

The PGRO advises spraying with the desiccant diquat when the moisture content is between 40-45%, the crop is turning yellow, the bottom pods are parchment-like and the seed is hard.

Middle pods should be pitted and crinkled and becoming parchment-like with rubbery seeds within, while top pods will still be fleshy and green/yellow in colour.

“Peas should be harvested when they are ready, as they are not a good crop that can wait for the combine,” says PGRO’s Becky Ward.

Growers are advised that diquat works more quickly than the herbicide glyphosate, and is a more effective desiccant spray on combine peas.

Pea crops are ready for harvest some seven to 10 days after treating with diquat, although the interval can depend upon the weather.

Glyphosate, which is widely used as a desiccant for oilseed rape, can be used pre-harvest in peas to control excessive green weed growth, but work at the PGRO has shown it has little desiccant action.

For glyphosate applications, at least seven days should elapse between applications and harvest, but it does tend to take longer to work than diquat.

An average moisture content before glyphosate applications should be below 30%, while growers are reminded that treatments should not be used on seed crops.

Mr Scrimshaw says combine pea and spring bean crops are looking promising this season, although many winter bean crops have suffered from being drilled late in wet conditions.

The spring area for peas and beans is expected to have increased due largely to the wet autumn drilling season, and this swing to spring pulses has given growers more time to control blackgrass.

DISEASE AND PEST UPDATE FROM THE PGRO

*Spring beans may be at risk from rust during warm weather while night-time temperatures fall and humidity is high. If pods are full, no action is necessary. Where pods are still filling tebuconazole, metconazole, azoxystrobin or cyproconazole will provide good protection against rust.

*Combining peas may be susceptible to powdery mildew which can reduce pod weight and yield. The maturity of combining peas can be delayed following infection. Dust at harvest can affect machinery and operators. Products containing cyproconazole will prevent the disease developing.

*Aphid colonies in peas and beans may cause damage until all pods are completely full. Aphicides should be applied if colonies are present and pods are still filling.