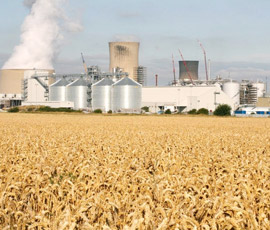 Prospects for the 2012 wheat crop look considerably brighter following this month’s beneficial rain – but what does that mean for market prices?

According to the HGCA’s December survey, farmers in England and Wales planted 3% more wheat than last year, at 1.86m hectares. Given a mean yield of 7.75t/ha, that could produce a 14.4m-tonne crop, plus spring wheat and Scottish plantings. So how heavily will the crop weigh on the domestic market?

As always, ex-farm prices are based on both supply and demand – and this year demand could be set to jump sharply, with two biofuel plants in the North East potentially taking 2.2m tonnes off the market.

By mid-May, Hull’s Vivergo plant was 98% complete, with commissioning (system testing) at 51% and set to speed up considerably over the next six to 10 weeks. The plant took its first load of wheat last month, and is set to begin production in the early summer, according to Mike Ayers, manager of Frontier’s Humber Gold club, which will supply the plant.

“The start-up date will depend on the last bit of commissioning, but once it’s running the plan will be to get up to full capacity as quickly as possible, as these plants don’t run well on half-pace tonnages.”

The Humber Gold club will source wheat from a 50 to 80-mile radius, with preferential payment terms and grain specification. “We now have just short of 800 members, so have got quite a bit of grain already bought. But we need 1,500-2,000 members, so are going to need to buy a lot more,” he adds. “Most of the wheat that will go into the plant would traditionally have gone on a vessel for export. With the exportable surplus greatly reduced in the area, the remaining surplus is more likely to be shipped out of south coast ports than the east.”

The Ensus site in Teesside, which has been mothballed for the past 12 months, has the capacity to take another 1.1m tonnes of wheat a year. Closed down due to a combination of high wheat prices, cheap US bioethanol imports, and poor distillers’ grains values, there is now hope of the plant reopening. “We haven’t set any timelines, as there are still uncertainties about the import of bioethanol and the potential for that to undermine the market,” says Stewart Easdon, wheat and animal feed manager at Ensus.

However, the EU is in the process of closing the loophole allowing US imports in as alcohol rather than fuel, which attracts a higher rate of duty. Higher distillers’ grains prices and weaker wheat markets may also signal a return to production, he adds. “It takes about three months to ramp up to full production, but there’s no reason once we have started not to run at full capacity of 90,000t a month.”

Given an average exportable surplus of about 2.5m tonnes, the two plants, once running at full capacity, will dramatically change the UK market balance. But Charlotte Garbutt, senior analyst at the HGCA, is not expecting a sudden shift in domestic prices. “It’s all extra demand, but while the Vivergo plant is in commissioning there is the chance that things could be delayed. It will also take time to ramp up to full capacity. I think the demand will come on steadily and the market will adapt as demand grows.”

Poor crop conditions across central and Eastern Europe could provide additional support to the market, she adds. “There is still concern about the winter crops, which suffered in the drought – there will be more spring plantings to compensate, but spring crops often yield less than winter crops. The UK’s crop condition is quite strong compared with some of the rest of Europe, but there is a long way to go before harvest.”

Global wheat production is set to drop by 17m tonnes this year, to 677m tonnes, according to the US Department of Agriculture’s latest report. Combined with a 9m-tonne increase in demand, end stocks should erode to give a healthy stocks to use ratio of 27.4%, says Mrs Garbutt. The maize crop is set to grow by 75m tonnes, to 946m tonnes. “However, with demand forecast 5.8% higher, end-stock growth may be limited, giving a stocks-to-use ratio of 16.5% – so remaining finely balanced.”