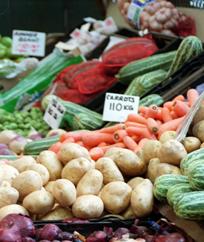 UK food supplies can no longer be taken for granted by consumers and the government, a report by a leading think tank has warned.

This could mean consumers will have to eat more genetically-modified produce, while consumption of organic food could have to be reduced.

Rising costs of grain and increased land prices could also force people to cut down on the amount on bacon, pork and beef they eat, it adds.

Rising food costs could signal the decline of the organic sector as people swtich to basic, budget foods, it adds.

“As price becomes ever more strongly the over-riding purchasing factor, there could be stagnation in areas of the market focused on premium/niche foods, and values based products (organic, fair trade and higher welfare ranges),” the report’s authors say.

The end of cheap food means the debate around GM technology needed to be reopened, they add.

In other bleak reading for the industry, the report says pig, poultry and egg producers could go out of businesses if grain prices rises make it unprofitable to continue.

Wales’ economy, which is highly dependent on meat production, could also be hit hard, it says.

The result would be a risk of unsafe food products flooding the market, requiring stronger enforcement standards in the UK.